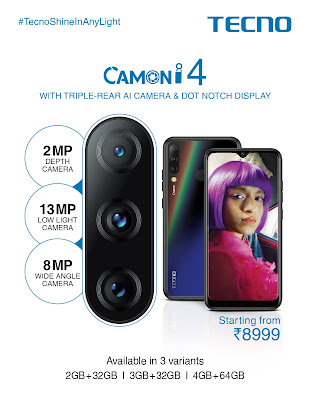 TECNO, the global premium smartphone brand, recently launched its first brand campaign for the year named ‘Shine in AnyLight’. The campaign aims to establish the newly launched CAMON i4 smartphone with triple rear AI camera as a product for those who consider “Life is a performance” and ‘Shine’ in any condition. The integrated marketing campaign includes a series of three documentary-style films featuring Vicky Roy – A Rag Picker turned street photographer, Toshada Uma – A Fashion model with Alopecia, and Chandani Srivastava - A Street Dancer turned Choreographer.

Conceptualized and executed by CreativeLandAsia, each film craftily visualizes the ‘Shine in AnyLight’ ethos through the achievements of these individuals who believe life is all about living their passion and following their dreams, no matter the darkness.  Deep inside everyone, there exists a unique and extraordinary element, waiting to be seen. These can be discovered through TECNO’s ‘AnyLight camera’ lens, and made to shine in any circumstances.

To build awareness and reach out to the core audience, the campaign includes three TV commercials with a duration of 20 seconds each.  The first TV ad from the series that went on air from 2nd May featured Vicky Roy, the Ace Photographer. The spots were running across some of the biggest reality shows on TV like The Kapil Sharma Show and Super Dancer on Sony, Little Champs on Zee TV, in addition to special shows like Salaam India on India TV. The next TV campaign, featuring Toshada – a fashion model with Alopecia, is all set to go on air from 25th May. The campaign will be present across 28 channels covering news, entertainment, and movies. These channels include Colors, Sony Sab, &TV, Sony Max and regional channels like ABP Bangla, and Star Jalsha to name a few.

The digital film is a 2-min documentary film on Vicky Roy, featuring his inspiring journey from a rag picker on the streets of Delhi to an internationally acclaimed photographer. The film translates into a message of living the passion and achieving success despite limited means, modest background and scarce opportunities. Over 5 million people have already seen the TV commercial in the past 15 days across digital platforms. Following this will be Toshada Uma’s documentary film.

Vicky’s “Shine in Anylight” story is inspiring millions of budding photographers who have come forward to share their own stories. The campaign’s sweeping success is reflected on TECNO’s Instagram page, which hosts many such inspiring stories clicked from the lens of CAMON i4. TECNO aims to invite fans across the length and breadth of the country to share their ‘Shine in Any light’ story with the world, through a photography contest. The winners will get a chance to attend the Photography Workshop with Vicky Roy. Eligible fans will be showcased on TECNO’s social media channels and get a chance to score exciting gifts.

The campaign will be further amplified on Social and digital platforms. To help consumers get a first-hand experience of the “AnyLight” camera smartphones, the brand will carry on-ground activities covering 100+ towns enabling direct face-to-face engagement with over 1 million consumers on-ground, during the entire course of the campaign.