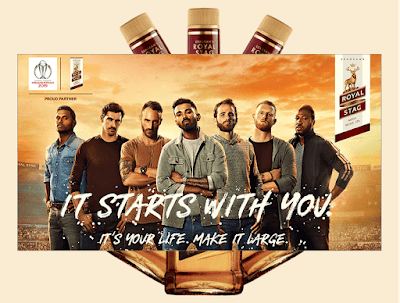 Making it large in the international cricket showground, Seagram’s Royal Stag, the proud partners of the ICC World Cup 2019, announces ‘India’s Largest Fan’ Campaign for die-hard cricket fans. Cricket undoubtedly is more than just a sport in our country. Watching the world cup live in England and Wales, is a dream for every cricket fan.

Royal Stag, an iconic brand that has always celebrated the spirit of cricket, is all set to ride on the cricket fever this season with the ‘Royal Stag India’s Largest Fan’ Campaign. Consumers can participate in the campaign by simply giving a missed call on 85019-85019 & get a chance to win an all-expense paid trip to watch the world cup live in England and Wales. The 360 campaign will run across print, radio outdoor and digital mediums.

The campaign will be supplemented with a high energy music video that personifies “India’s Largest Fan” and the dream of watching the world cup live in England and Wales. The high-octane song has been written by Swanand Kirkire ,Music by Shamir Tandon & sung by Benny Dayal. The audio visual really brings to life the spirit of cricket & the experience of India’s largest Fan. You can also preview the music video on YouTube- https://www.youtube.com/watch?v=9RajZujWe7o .

Commenting on the association, Kartik Mohindra, Chief Marketing Officer, Pernod Ricard India said,” Royal Stag’s ‘India’s Largest Fan’ contest is the perfect opportunity for our patrons to fulfill their dream of watching the ICC Cricket world cup live and that too in England & Wales, the place from which cricket originated. Cricket is worshipped like a religion in India and we understand the passion people have for the sport in this country. Our association with the ICC World Cup 2019 will further reinforce our commitment to the sport. Royal Stag has always lived up to its brand philosophy of ‘Make it large’. With India’s Largest Fan Contest, we hope to give cricket lovers a ‘money can’t buy experience’ in England and Wales, truly making it large in full glory and taking forward our association with the ICC”.
Posted by editor-manu-sharma at 7:16 PM