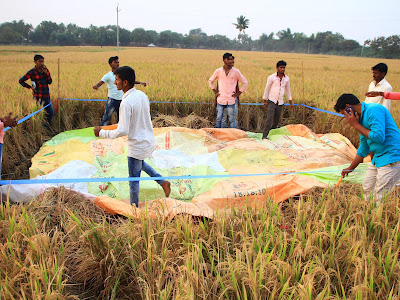 The Central Government of India had partnered with CropIn and nine other research institutions and private agencies to optimize Crop Cutting Experiments (CCE) across the country in September 2018. The goal behind the initiative was to optimize the Crop Cutting Experiments to make them more accurate, scalable and predictable by using cutting-edge technologies like Remote Sensing, Artificial Intelligence and Big Data Analytics. The initiative was carried out under the Pradhan Mantri Fasal Bima Yojana (PMFBY), the Centre's flagship crop insurance programme, and was coordinated and monitored by the Mahalanobis National Crop Forecast Centre (MNCFC).

The PMFBY requires the states to carry out a minimum of four crop-wise CCE in every gram panchayat for the submission of the yield data to insurance companies within 30 days of harvest. The CCE was traditionally being conducted using a random survey method to estimate the crop yields of a given location. However, considering that there are 2.5 lakh gram panchayats in India, it is challenging to conduct reliable and accurate CCE in the country at scale within a short harvesting window. Applying technology to the traditional process of CCE will expedite the execution of the experiments and ensure faster processing insurance claims under PMFBY.

The MNCFC has now extended the pilot studies that were being conducted by CropIn to the Rabi season. The objective of these pilot studies is two-fold: 1. It seeks to optimize the number of crop cutting experiments so that they become more manageable, 2. It wants to establish a robust dispute resolution mechanism that enables swift resolution of claim disputes.

The first phase of the pilot studies began in September 2018 and was completed by February 2019. For the next phase, that is Rabi season 2018-19, the studies are being conducted in 25 districts across 10 states including Andhra Pradesh, Bihar, Karnataka, Kerala, Madhya Pradesh, Maharashtra, Odisha, Rajasthan, Uttar Pradesh, and West Bengal. CropIn will be conducting the CCE in 4 districts across the states of Karnataka, Bihar, Kerala, and Madhya Pradesh. These pilot studies are integral to a more efficient claims processing system which will eventually have a huge impact on the success of PMFBY. The State Governments’ support in executing these studies will continue to play a crucial role.

Similar to the first phase, CropIn will be using its cutting-edge yield and health mapping proprietary AI-ML algorithms that leverage satellite imagery to conduct the CCE. CropIn’s flagship agri-tech products, SmartFarm and SmartRisk will ensure the accurate and efficient execution of the CCE.

CropIn is trying to ensure that CCEs are no longer conducted on random plots. SmartRisk™,  CropIn’s award-winning AI and ML-powered platform, uses both satellite imagery and ground-level data to identify the plots that represent the most accurate sample for the district. Apart from plot selection, SmartRisk also helps both the Government and the insurance companies to gain access to scientific, scalable, and accurate reports that make it easier to conduct crop yield assessments and process insurance claims.

CropIn’s flagship product, SmartFarm, is a digital farm management solution that captures the precise location and size of the farm on which the CCE is being conducted as well as the details of the farmer. This enables greater visibility and transparency in the entire CCE process. CropIn’s AI and ML algorithms not only enable the smart-sampling of crops but also enhance visibility across the entire process. CropIn enables access to a variety of data points, from identifying the crop being grown in a unit area to the harvest readiness of the crops to determine the optimal crop yield points. This allows relevant stakeholders to make more informed decisions.

Indian farmers officially have access to subsidized insurance policies but in order to get coverage or get claims processed, they need to jump through several hoops. With technology-powered CCEs, the process becomes more objective, accurate and fair. The Government’s extension of the CCE pilot studies goes to show that there is enormous potential in a more technology-centric approach.
Posted by editor-manu-sharma at 2:51 PM