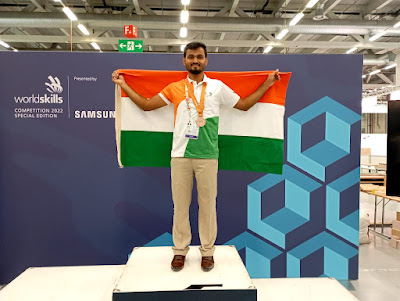 Displaying extraordinary skill and talent, Mr. Likith Kumar YP won a bronze medal for India in prototype modelling at the WorldSkills Competition 2022 (WSC2022), held in Bern, Switzerland from September 7 till 10, 2022.

Likith has completed his diploma in Mechatronics from Toyata technical training institute and was training for the competition since the beginning of this year. He has been trained by Mr. Bhaskar Singh, Toyota India Expert, who is also the Chief Expert for Prototype Modelling Skill at WorldSkills International Competition. Likith had won the national skill competition, IndiaSkills 2021 in this trade and has now become an inspiration for India’s youth after getting recognised by WorldSkills Competition, the gold standard of skills excellence.

A farmer’s son, Likith has made a name for himself and his family with this huge achievement. From getting selected by the training institute, winning IndiaSkills competition and now winning a bronze medal for the country at an international platform, Likith has left no stone unturned.

Ved Mani Tiwari, COO, NSDC stated, it is encouraging to see India’s youth participate and get recognised on this global platform. My congratulations to Likith Kumar and his family. Likith’s win is a testament that India’s youth is getting proficiently skilled in new-age trades and getting ready for the future of work. Our complete focus is on harnessing the potential of India’s young talent and raising their profile on global platforms like WorldSkills Competition. With this, we will continue to build robust skilling ecosystems for India and partner countries as a skilled workforce is the backbone of making us the Skill Capital of the World.

WorldSkills Competition is the biggest vocational education and skills excellence event in the world, reflecting the benchmarks of the global industry. WorldSkills Competition 2022 was scheduled to take place in Shanghai, China. Due to the current lockdowns in Shanghai and ongoing pandemic prevention and control restrictions in China, now the sixty-two skill competitions are being held over 12 weeks in 15 countries and regions between 7th September and 26th November 2022.

Founded in 1950, WorldSkills is the global hub for skills excellence and development. WorldSkills brings youth, industries, and educators together to give youth the chance to compete, experience, and learn how to become the best in their skill of choice. From the traditional trades to multi-skilled technology careers in the industry and service sectors, supported by partners, industries, governments, volunteers, and educational institutions, WorldSkills’ vision is to improve the world through the power of skills. It has 85 member countries and regions, all working with youth, educators, governments, and industries to help prepare the workforce and talent of today for the jobs of the future.

WorldSkills India is an initiative of the National Skill Development Corporation (NSDC) under Ministry of Skill Development and Entrepreneurship which has been leading India’s participation at WorldSkills International competitions since 2011. Skill competitions have always been a force multiplier in India’s mission to train its youth in globally relevant skills. It plays a vital role in helping the youth become more employable by inculcating soft skills such as teamwork, communication, problem-solving and time management. These competitions also offer the youth a unique opportunity to see up close the best professionals in their field and raise their standards to a global level.

Posted by editor-manu-sharma at 6:29 PM