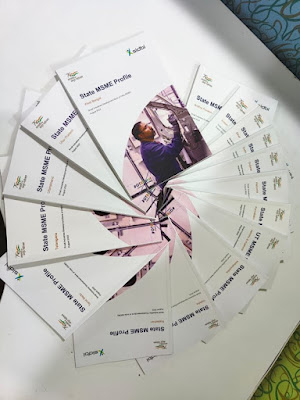 Small Industries Development Bank of India (SIDBI), the Principal Financial Institution engaged in the promotion, financing and development of Micro, Small and Medium Enterprises (MSMEs) has been working closely with state governments to strengthen MSME eco-system at State level, based, inter alia, on recommendation of UK Sinha Committee report. SIDBI has extended technical assistance to state by setting up Project Management Unit (PMU) in 19 states. These PMUs have been working closely with nodal departments of State to facilitate shaping enterprise/industrial policies as also adopt good practices in other states.

As part of development initiative SIDBI also organised a national sharing and learn shop for state stakeholders, which had evinced appreciative participation.

SIDBI has for the first time come out with the MSME State Profiles of 16 States, which was launched on September 12, 2022. These State Profiles are to be provided to state governments for them to take advantage of the profiles and spread the best practices followed for the benefit of MSME in their respective state.

CMD SIDBI stated that the objective of the MSME State Profile is to understand the existing practices and initiatives about the MSME ecosystem in the states across India. The reports contain the brief industry profile of the state, cluster development initiatives, supporting agencies, state promoted schemes, policies, and partnership with GoI in twinning various schemes. The report also captured the best practices that are being implementing in the other states and suggested measures to create more conducive environment to develop start-up entrepreneurs and strengthen existing MSMEs.

Since its formation in 1990, SIDBI has been impacting the lives of citizens across various strata of the society through its integrated, innovative and inclusive approach. Be it traditional, domestic small entrepreneurs, bottom-of-the-pyramid entrepreneurs, to high-end knowledge-based entrepreneurs, SIDBI has directly or indirectly touched the lives of Micro and Small Enterprises (MSEs) through various credit and developmental measures. For more information,  visit:  https://www.sidbi.in/

Posted by editor-manu-sharma at 7:48 PM