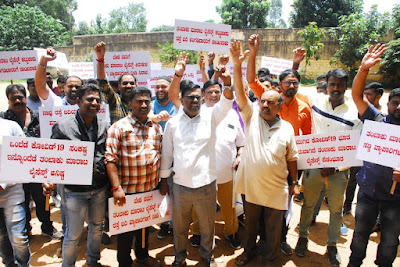 The Karnataka State Retail Beedi-Cigarette Merchants Association has strongly objected to the implementation of the Karnataka Municipalities (Regulations and inspection of places used for sale of Cigarettes and other tobacco products) Model Bye-Laws, 2020.

·         Harassment of poor and uneducated micro-retailers by enforcement officials at a time when small shop-keepers have already lost 60%-70% their income due to frequent lockdowns.

·         Sharp increase in the cost of doing business of micro-retailers

The association strongly believe that the proposed regulation will be devastating for lakhs of small traders, who have already suffered humungous financial setbacks in the last couple of years due to Covid lockdowns and other restrictions. It further emphasized that too many tobacco laws will only increase the scope of harassments and corruption by enforcement officials.

The Association represents the Karnataka Chapter of the Federation of Retailer Association of India (FRAI) and is a body of over 2.0 lakh micro, small and medium retailers from across the state of Karnataka. It also represents the livelihood of over 10 lakh poorest of the poor retailers and their families and are known for raising issues concerning their lives and livelihoods.

Explaining the concerns around the proposed byelaws, B. N. Murali Krishna, President, Karnataka State Retail Beedi-Cigarette Merchants Association, said, “On account of the provisions of the Prohibition of Advertisement and Regulation of Trade and Commerce, Production, Supply and Distribution Act, 2003, COTPA, our members are already being subjected to daily harassment by enforcement officials, who take advantage of their illiteracy and lack of awareness to extract gratifications. As per the draft Model Bye-Laws, tobacco product sellers will have to get a license which will be renewed every year. In addition to that, multiple obligations on the part of the retailers, such as the display of license and maintenance of a suggestion book, along with heavy penalties in case of non-compliance have been proposed in the regulation.”

The Karnataka State Retail Beedi Cigarette Merchants Association believes that such measures will cause massive harassment to lakhs of poor and mostly uneducated micro-retailers at the hands of enforcement officials. It will lead to a sharp increase in their cost of doing business at a time when they are reeling under the aftermaths of the COVID pandemic and this fresh attack will completely devastate their families.

Mr. Murali Krishna added that based on the past experience with other laws, the very act of getting a license will be challenging for small sellers as neither they have money to pay nor they are educated enough to do the paperwork required for licensing.More laws will also mean more opportunities for local officials to harass our members.

Our beloved and Hon’ble Prime Minister and Hon’ble Chief Minister of Karnataka have taken several important measures to simplify processes for trading in Karnataka in the true spirit of ‘ease of doing business’ and ‘promotion of entrepreneurship’. However, the Urban Development Ministry’s proposal to make licences mandatory for trading in tobacco products through the Model Bye-Laws and its draconian clauses are in complete contradiction to the Hon’ble Prime Minister and Chief Minister’s vision for the state.”

The Draft Model Bye-Laws states that if any ‘bad incident’ occurs at a licensed shop, the same has to be reported to the authority and no one will be allowed to enter the shop premises until the issue is addressed. Since a ‘bad incident’ is not defined, it is clear that the only objective behind this exercise is to cause hardships to small shopkeepers. The Karnataka State Retail Beedi Cigarette Merchants Association members belong to the lowest economic strata of society. It will be impossible for them to afford extra spends for licenses and renewals.

The Association has demanded that the state government must provide alternate means of livelihood to its members before implementing such rules, which will surely result in a loss of income for lakhs of traders. It has further claimed that its members sustain their livelihood by selling goods of daily needs like biscuits, soft drinks, mineral water, bidi, cigarettes, etc. “Their pre-lockdown earnings were about Rs 6,000-12000 per month which is barely adequate to feed two square meals a day to an entire family. Many of them have borrowed money to run their shops instead of depending on the government for employment.

After suffering immense financial setbacks due to Covid lockdowns, The Karnataka State Retail Beedi, Cigarette Merchants Association is shocked to see that the Urban Development Ministry of Karnataka instead of supporting the small poor retailers has instead come up with an order that will deal a death blow to marginal retailers by increasing their harassment multi-fold and increasing the cost of doing business.

The Association is also of the view that the proposed licensing law for selling tobacco products are brought under pressure from anti-tobacco NGOs with vested interests will only aid shifting of tobacco retailing business to foreign companies/supermarkets/malls hurting livelihoods of lakhs of small shopkeepers.

India already has the toughest anti-tobacco laws in the world, which includes 85% graphic health warnings on packets, no sale to minors, no sale within 100 yards around educational institutions, etc. The Karnataka State Retail Beedi Cigarette Merchants Association strongly believes that these laws under the current COTPA 2003 regulation for tobacco control/trade are more than sufficient for regulating tobacco products. Therefore, there is absolutely no need to introduce any new licensing rule on the trade of tobacco products in Karnataka.

The Karnataka State Retail Beedi Cigarette Merchants Association humbly request the Hon’ble Chief Minister of Karnataka not to implement the Karnataka Municipalities (Regulations and inspection of places used for sale of Cigarettes and other tobacco products) Model Bye-Laws, 2020 mandating licensing requirement for selling tobacco products issued by the Urban Development Department and instead help our members recover from the loss of the income due to the Coronavirus pandemic.

Posted by editor-manu-sharma at 6:52 PM