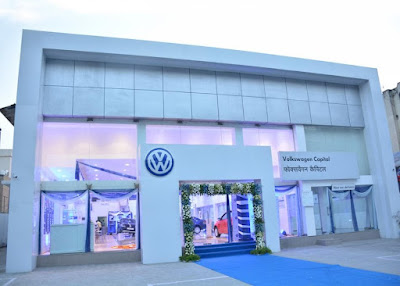 -       Volkswagen Virtus deliveries across the company’s dealerships started on the LONGEST DAY OF THE YEAR, i.e. 21 June, 2022

Group Landmark’s Volkswagen dealerships in Gujarat have made history in India and Asia, registering the company’s name in the India Book of Records (IBR) and the Asia Book of Records (ABR) for the record for ‘maximum single model Volkswagen vehicles sold by a dealer in a single day’. The company was honoured at a ceremony earlier today when IBR and ABR officials handed over the certificates for the record to Group Landmark's managing director Garima Misra. Group Landmark’s Volkswagen dealerships started deliveries of the new Volkswagen Virtus across India last month. On the first day of deliveries, i.e. 21 June, the company delivered 165 units of the sedan across Gujarat, thus securing its name in the history books. The made-in-India Volkswagen Virtus sedan is based on the MQB A0 IN platform and features up to 95% localisation.

Commenting on the stellar achievement, Sanjay Thakker, Chairman and Founder, Group Landmark, said, “We are absolutely thrilled to receive this honour from India Book of Records and Asia Book of Records. The new record is a testament to not only Group Landmark's expansive network but also the delightful customer experiences the brand promises and continues to deliver. The achievement also serves to demonstrate the high demand that the new Volkswagen sedan has received from the get go.” He added, “As we go forward, our customers can be certain that Group Landmark will continue to be the premier one-stop destination for their car-buying needs.”

Garima Misra, Managing Director, Group Landmark, added, "We were certain that Volkswagen Virtus was destined to be a hit in the market and the immense response we have received for the sedan has served to prove that. The fact that Group Landmark’s name is now registered in the India Book of Records and Asia Book of Records is an incredible honour.”

Volkswagen Virtus, which measures 4,561 mm in length, is the longest car in the premium midsize segment in the country. The sedan is available with a choice between two turbocharged petrol engine options: a 1.5-litre TSI EVO engine with Active Cylinder Management Technology (ACT) and a 1.0-litre TSI engine.

The 1.0-litre motor belts out a maximum power output of 115 PS (85 kW) and a peak torque of 178 Nm. Whereas the 1.5-litre motor generates a peak power output of 150 PS (110 kW) and a maximum torque of 250 Nm. Volkswagen offers both engine options with a 6-speed manual gearbox as standard; additional transmission options include a 6-speed automatic torque converter for the 1.0-litre engine-powered model and a 7-speed DSG transmission option for the model powered by the 1.5-litre motor.

Group Landmark, the largest luxury and premium car dealership network in India, opened its first dealership in 1998, and has, since then, expanded its network to include 115 outlets across eight states, operating showrooms for top-tier brands such as Mercedes-Benz, Volkswagen, Honda, Jeep, Renault, and BYD. The company treads beyond the realm of your run-of-the-mill automotive dealership to offer customers unparalleled buying experiences from start to finish. The promise of such novel experiences are backed by Group Landmark’s robust presence across the automotive retail value chain, which includes myriad services besides sales of new vehicles, such as after-sales service sales of pre-owned passenger vehicles and third-party financial and insurance products.

Posted by editor-manu-sharma at 5:12 PM