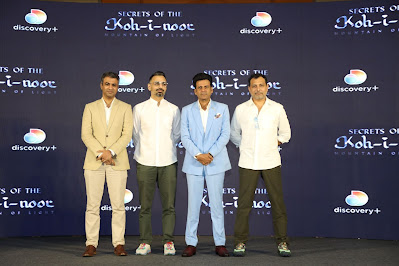 * Enriched with opinions from experts including Parliamentarian and Author, Dr. Shashi Tharoor, Historian Irfan Habib, renowned Archaeologist K.K.Muhammedand, Adv. J Sai Deepak and Prof. Farhat Nasreen amongst others, the docuseries sheds light on the history and the importance of one of the largest cut diamonds in the world, the Kohinoor

For centuries, dark secrets and mystery shrouds one of the most beautiful and largest cut diamonds in the world- the Kohinoor. Retracing the story and controversies around what is inarguably India’s most prized possession that was wrongfully snatched during the British rule, discovery+ comes together with acclaimed director Neeraj Pandey – Friday Storytellers and the versatile National Award and Padma Shri-awardee Manoj Bajpayee for a fascinating docuseries in the ‘Secrets’ franchise, titled ‘Secrets of the Kohinoor, premiering on August 4, 2022.

After the roaring success of ‘Secrets of Sinauli: Discovery of the Century’, discovery+ is expanding the ‘Secrets’ franchise to showcase one of the most contentious debates on the origins and ownership of the illustrious jewel. The docuseries uncovers aspects like how, over the years, since its discovery, the weight of the diamond has been slashed down to less than six times its original weight; or that the Kohinoor, which we want to call our own, might not be the same diamond Emperor Babur mentioned in his memoir. Featuring Parliamentarian and Author, Dr. Shashi Tharoor, Historian and AMU, Irfan Habib, Dr. Adrienne Munich, Prof. Farhat Nasreen, K. K. Muhammed, Dr. Manvendra Kumar Pundhir, Navtej Sarna, J Sai Deepak, Dr.Danielle Kinsey, Dr.Miles Taylor and Master Diamond Polisher Ms.Pauline Willemse.

Directed by Raghav Jairath, the docuseries also uncovers the stories of multiple rulers and their insatiable desire for the Kohinoor which led to significant and very bloody wars, triggered agonizing mind games, and empowered rulers and ruined dynasties whilst exploring stories of powerful emperors whose lives intertwined with the diamond in unfathomable ways. Just like the Kohinoor with its timeless allure, Secrets of the Kohinoor through its sharp storytelling and creative treatment is expected to be just as riveting, serving as a guiding reference for enthusiasts, general audiences, and history connoisseurs in the years to come.

Speaking about the docuseries, actor Manoj Bajpayee, said, “The opportunity of presenting this particular series in the franchise has been a uniquely satisfying and a learning experience for me, and for that, I am truly grateful to discovery+ and Neeraj Pandey. This project marks my second collaboration with them. Despite being talked about for years, there are many facts about the Kohinoor that were unknown to me, and I am certain, they would be unknown to a majority of the world as well. The revelations made in the documentary took me by surprise and I cannot wait for viewers to explore this untold story and be just as surprised.”

Creator Neeraj Pandey, added, “The unseen, disguised and unknown historical facts have always intrigued and fascinated me to delve deep into the subject. After the amazing response to Secrets of Sinauli, the idea to explore the mystery of the Kohinoor excited us as it has been one of the most talked about diamonds in the history of time.” He further adds, “Our partnership with discovery+ has been great at bringing alive stories that are bigger, better, and bolder. Moreover, it is always a pleasure to work in collaboration with Manoj, who is a master of his craft and has taken the show to a whole new level with his striking storytelling expertise. The robust research, peppered with inputs from renowned scholars and experts, digs deep into the story of Kohinoor to surface lesser-known facets of its journey whilst narrating the importance of bringing it back to its homeland.”

Sai Abishek, Head of Factual & Lifestyle Cluster- South Asia, Warner Bros. Discovery, shared, “We’re pioneering the history genre with our distinctive offerings that appeal to audiences across age groups. We have added another Indian Originals IP to our already expansive history genre on the platform with the growing ‘Secrets’ franchise. Following the massive success of ‘Secrets of Sinauli: Discovery of the Century’, we realized the tremendous potential in the subject and thereby built on the successful collaboration with Neeraj Pandey and Manoj Bajpayee. The captivating history of Kohinoor and its unexplored aspects are even more prevalent now and need to be known by audiences across the globe.”