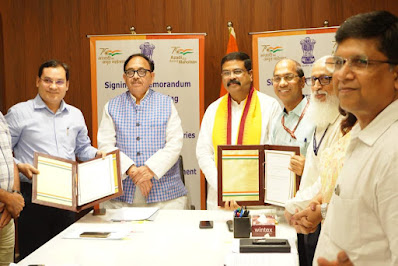 The Ministry of Skill Development and Entrepreneurship (MSDE) and the Ministry of Heavy Industries (MHI) today signed a Memorandum of Understanding (MoU) to create a collaborative ecosystem for imparting skill development training in the capital goods sector. The partnership is aimed at facilitating training in several engineering trades through Qualification Packs (QPs) developed by MHI related Sector Skill Councils (like Automotive, Infrastructure, Instrumentation and Capital Goods) under the Scheme for Enhancement of Competitiveness in the Capital Goods Sector Phase II.

Under the partnership, MSDE through National Skill Development Corporation (NSDC) will facilitate linkages between various Sector Skill Councils (SSCs) and industry partners for imparting skilling in engineering trades. MSDE will also constitute a review committee headed by a senior NSDC official and at least seven other members, including representatives from SSCs.

Gracing the ceremony, Shri Dharmendra Pradhan, Minister of Skill Development and Entrepreneurship and Education, said growth of capital goods sector is correlated to the success of Make in India program. The growth in manufacturing sector will create more demand for a skilled workforce and the MoU will pave the way for creating a more skilled vibrant workforce for the sector.

Shri Mahendra Nath Pandey, Minister of Heavy Industries, welcomed the partnership, saying heavy manufacturing industry is one of the most important sectors in terms of employment generation, exports, and value addition to the economy. Any growth in this sector presents huge potential for the economy and is a step towards fulfilling Hon’ble Prime Minister Shri Narendra Modi’s vision of an Aatmanirbhar Bharat.

MHI, on its part, will provide grants to SSCs for developing new industry-led National Skills Qualifications Framework (NSQF) Level 6 and QPs. Following the identification of job roles based on demand and new technology, SSCs will submit the same for NCVET’s approval. MHI will also fund SSCs for the creation of QPs in several engineering trades to promote skilling in the capital goods and automotive sectors. The ministry will further facilitate necessary linkages between SSCs and the sectors as well as monitor the progress of the project.

About the Ministry of Skill Development and Entrepreneurship (MSDE)

MSDE was formed on 9th November 2014, by the Government of India to focus on enhancing employability of skills. Since its inception, MSDE has undertaken significant initiatives and reforms in terms of formalizing the policy, framework and standards; launching of new programs and schemes; creating new infrastructure and upgrading the existing institutions; partnering with States; engaging with industries and building societal acceptance and aspirations for skills. The Ministry aims to bridge the gap between demand and supply of skilled manpower to build new skills and innovation not only for existing jobs but also for jobs that are to be created.

About Ministry of Heavy Industries (MHI)

The Department of Heavy Industry (DHI) strives to bolster profit making PSEs as well as restructure and revive sick and loss making PSEs under its administrative control. The DHI seeks to achieve its vision of global automotive excellence through creation of state- of- the- art Research and Testing infrastructure through the National Automotive Testing and R&D Infrastructure Project (NATRIP). The DHI seeks to achieve its vision by providing necessary support to the Auto, Heavy Engineering. Heavy Electrical and Capital Goods Sector.

Posted by editor-manu-sharma at 6:39 PM