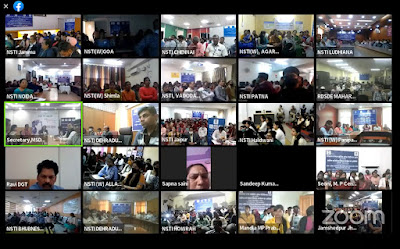 On the eve of International Women’s Day, the National Institute for Entrepreneurship & Small Business Development (NIESBUD), an apex organization under the Ministry of Skill Development and Entrepreneurship, in its endeavor to achieve Hon’ble Prime Minister Shri Narendra Modi’s vision of Aatmanirbhar Bharat, opened its extension centres in 20 National Skill Training Institutes (NSTI) across the country to promote entrepreneurship. The centres were inaugurated by Shri Rajesh Aggarwal, Secretary, MSDE through a virtual event.

The Secretary mentioned that these centres will meaningfully create a vibrant and visible impact in the space of entrepreneurship at state level and will leverage integrating the existing resources to create a synergy aimed at promotion and development of entrepreneurship.

Shri Atul Tiwary, Additional Secretary, MSDE and Director General, DGT mentioned given the energy, enthusiasm and innovativeness, young people of our country have the potential to contribute immensely to the socio-economic development of our nation. They should be placed at the forefront of building the economy of the country. This is a high priority agenda item for us. Shri Tiwary appreciated the decision of opening centres of NIESBUD in NSTI as they can collectively work towards promoting entrepreneurship in states.

While welcoming the Chief Guest and the dignitaries Dr Poonam Sinha, Director, NIESBUD apprised that this a historic day for NIESBUD witnessing its reach expanding across the geographical boundaries of the country.  Dr Sinha thanked Secretary, MSDE for his guidance and leadership due to which NIESBUD could expand its reach at pan India level.

Smt. Sandhya Salwan, Deputy Director General, DGT and Shri Sandesh M Tilekar, Director, Entrepreneurship were also present during the inauguration ceremony. NIESBUD faculties conducted Entrepreneurship Awareness Programme in the NSTIs on this occasion for the NSTI trainees which will be followed by one week Entrepreneurship Development Programme and extending mentoring and handholding support to the trainees willing to start their enterprises.

About Ministry of Skill Development and Entrepreneurship (MSDE)

MSDE was formed on 9th November 2014, by the Government of India to focus on enhancing employability of skills. Since its inception, MSDE has undertaken significant initiatives and reforms in terms of formalizing the policy, framework, and standards; launching of new programs and schemes; creating new infrastructure and upgrading the existing institutions; partnering with States; engaging with industries and building societal acceptance and aspirations for skills. The Ministry aims to bridge the gap between demand and supply of skilled manpower to build new skills and innovation not only for existing jobs but also for jobs that are to be created. Till date, more than three crore people have been trained under Skill India.

About National Institute for Entrepreneurship and Small Business Development (NIESBUD)

The National Institute for Entrepreneurship and Small Business Development is a premier organization working under the guidance and overall supervision of the Ministry of Skill Development and Entrepreneurship, engaged in training, consultancy, research, etc. in order to promote entrepreneurship and Skill Development. NIESBUD has provided training to over 12 lakhs people till date through more than 45 thousand different training programmes since inception including 5000 plus international participants hailing from more than 145 countries.