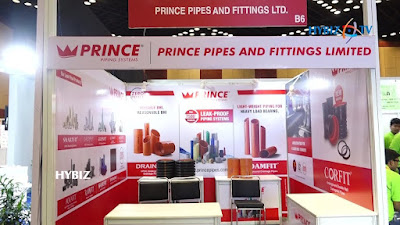 Prince Pipes and Fittings Ltd. and Red FM celebrated the spirit of plumbers across India on World Plumbing Day. Prince Pipes has been taking the industry lead in commemorating the World Plumbing Day since 2018, and this year Prince Pipes and 93.5 Red FM took the initiative to commemorate the day through a unique radio campaign - Shram Ka Samman to honour the resilient spirit of plumbers and the value they bring to households.

Nihar Chheda, VP Strategy, Prince Pipes and Fittings Limited said, “Prince Pipes is in its fourth year of this campaign and every year our engagement has been growing stronger with growing membership on our Udaan loyalty platform. Plumbers have shown excellent participation in 7 cities across India for this event. There are 2 parts to the theme Shram Ka Samman – the first being the event has been full of fun where Prince felicitated plumbers for their tireless work and their long standing association with us. The campaign’s second key aspect is inspiring them about dignity of labour. This campaign is also about sensitinsing them to keep upgrading themselves in their profession to bring their best to their jobs. Keeping in mind changing times Prince conducts skill enhancement workshops for plumbers to train them about new products, technologies, etc. We work with them so that they are able to make the best recommendations to their customers, which will help them command respect.  This is a very important way Prince Pipes creates value along the chain. Prince has also provided for over 5000  loyal plumbers with accidental insurance policies -  again an industry first.”

About the Shram Ka Samman campaign:

‘Shram Ka Samman’ is an initiative that intent is to motivate the plumber community, encourage and appreciate their contribution to society and industry, as well as to inspire them to consistently upgrade their technical and soft skills with changing times. The event is being organised across seven cities – Mumbai, Pune, Delhi, Patna, Jaipur, Bangalore and Hyderabad in association with Red FM. Eminent radio jockeys interacted with plumbers, at plumber meets to discuss their professional challenges, explore their lives and their ambitions. Plumber song: https://youtu.be/_A18cnmIV1g

·         2020: Celebrated the efforts of plumbers through a loyalty program and association with Udaan – PPFL’s proprietary plumber loyalty membership and marketing program

·         2021: From bathroom fixers to bathroom singers – PPFL celebrates the undying spirit of plumbers with all India participation of plumbers in Mera Plumber Yaar, Singing Superstar campaign

Prince Pipes and Fittings Limited (PPFL) (NSE: PRINCEPIPE I BSE: 542907) is one of India’s largest integrated piping solutions & multi polymer manufacturers, based in Mumbai, Maharashtra. Incorporated in 1987, Prince is one of the fastest growing companies in the Indian pipes and fittings industry. Over 3 decades, the company has been engaged in the manufacturing of polymer piping solutions in four types of polymers - CPVC, UPVC, HDPE, PPR. In August 2020, the Company announced its association with Lubrizol - inventors and largest manufacturers of CPVC compounds worldwide, headquartered in the United States; and thereafter launched Prince Flowguard Plus CPVC plumbing systems. In December 2021, the company was included in the Fortune India 500 rankings. With a network of more than 1,500 distributors, PPFL is steadily increasing pan-India distributor base to ensure stronger customer proximity to respond faster to their needs. Prince Pipes and Fittings Limited has 7 state-of-the–art manufacturing units located across the country at Haridwar (Uttarakhand), Athal (Dadra and Nagar Haveli), Dadra (Dadra and Nagar Haveli), Kolhapur (Maharashtra), Chennai (Tamil Nadu), Jobner (Rajasthan) and Sangareddy (Telangana).