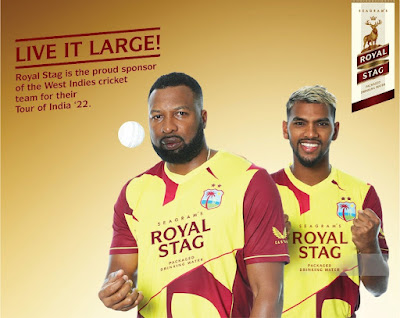 Seagram’s Royal Stag is proud to announce its collaboration as Official Sponsor of the West Indies cricket team for the ongoing tour to India. Team West Indies is synonymous with performance that is enhanced by natural Caribbean flamboyance, and this style fits in perfectly with the Royal Stag brand philosophy – “It’s your life. Live it large.” True to its iconic status and love for the ‘gentleman’s game’, Royal Stag is all set to root for these cricketing titans who are loved by cricket aficionados across India.

Cricket has always been central to Royal Stag’s brand communication. Over the years, the brand’s continuous association with the world’s top cricketers and teams has bolstered its engagement with cricket lovers across the country. This year, Royal Stag raises a toast to the game by associating with a team that plays with heart and passion, and celebrates its successes with style, panache, and exuberance – a perfect alignment with the brand core.

Speaking on the sponsorship, Kartik Mohindra, CMO, Pernod Ricard India, said “For a whole generation of cricket fans, West Indies embodied the perfect blend of unmatched talent, positive attitude and unparalleled flair. In the last decade, the team has rediscovered that unique spirit and has players who have helped the Caribbean win two T20 World Cups. Royal Stag has over the years celebrated all these qualities, which makes this association even more special. What's more, several players in this squad are adored in India because of their remarkable game-changing performances in T20 cricket. Royal Stag has been synonymous with the excitement and pulsating action of limited overs cricket for almost two decades now. By becoming the official sponsor of the West Indies for the ongoing series, we continue our association with the magic of the sport.”

Dominic Warne, Cricket West Indies Commercial Director, said: “We are really pleased to develop this new partnership with Royal Stag in India with our exciting West Indies Men’s team. Fans in India and around the world have always had a great love and following for the West Indies teams and players.  In a busy year of intense cricket with India due to the Caribbean tour later in 2022, we’re excited about this association with an action-packed ODI and T20I Series ahead of us.“

Seagram’s Royal Stag is the flagship brand of Pernod Ricard India. Royal Stag has been a consistent star since launch, and a brand quite often credited to have changed the rules of the game. It is for the young, confident, progressive, and inspiring individual who embodies self-belief. The brand has been inspiring the youth of India through its communication around the philosophy of “It’s your life. Live it large”.