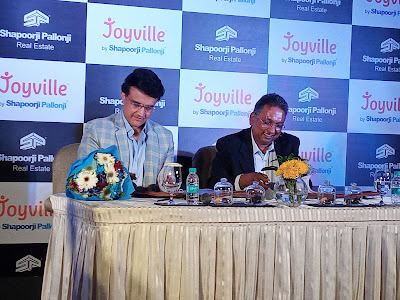 Joyville Shapoorji Housing, the aspirational housing brand of the Shapoorji Pallonji Group, has roped in the former captain of the Indian cricket team- Sourav Ganguly as its Brand Ambassador.

As part of the association, Sourav Ganguly will lead the brand campaigns of the company and portray Joyville Shapoorji’s core values to the home buyers. The former captain of the Indian National Cricket Team who is also known as ‘Dada’ is a household name in India for his positive attitude, leadership qualities and dependable nature.

Commenting on the association, Mr. Sriram Mahadevan (MD, Joyville Shapoorji Housing) said, “We are delighted to appoint Sourav Ganguly as our brand ambassador. He is our first choice because of his dynamic personality, leadership qualities and reliability. We are confident that with this association, we will be able to reach out to our target audience, more meaningfully.”

Commenting on the association, Mr. Sourav Ganguly said, “It is my pleasure and honour to be associated with Shapoorji Pallonji Group and be the face of brand Joyville. It is a historic association for me because Shapoorji Pallonji has a legacy of excellence. Their 156-year-old business speaks volumes of the legacy, quality, and class of the brand. The brand has its presence in India and overseas creating iconic landmarks. I am proud to be associated as a brand ambassador of Joyville Shapoorji Housing. This association is special to me, and I hope it will enable Joyville to scale new heights.”

Joyville will be launching the new brand campaign soon with Sourav Ganguly which will be amplified through a 360-degree marketing approach.

Known for embracing its values like transparency, reliability, trust, and confidence at the core of everything they do, the brand Joyville offers not just homes, but a way of life that empowers residents with the best of everything.

Backed by the rich legacy of Shapoorji Pallonji Group, Joyville is committed to designing aspirational homes across key markets. The brand has not only focused on building robust communities but also curating an upgraded lifestyle for young aspiring Indians. Joyville is passionate about crafting each home with perfection and adhering to the highest standards of quality and efficiency.

Joyville is a USD 200 million platform by Shapoorji Pallonji, ADB, IFC and Actis to develop aspirational housing projects in India. It has already launched Joyville Howrah (near Kolkata), Joyville Virar (near Mumbai), Joyville Hinjawadi (near Pune), Joyville Gurugram. Joyville Hadapsar Annexe is the fifth project of this platform.