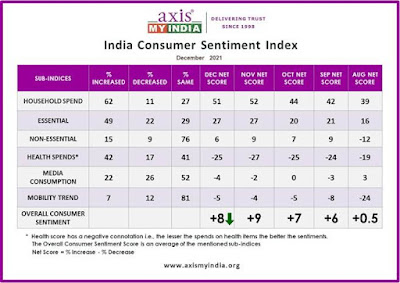 * 81% families are going out the same for short vacations/mall/restaurants, consumption increased for 18YO-25YO

* Combined 27% prefer Hindi and regional websites and apps while 24% prefers English, reflecting 60% of the youth.

* 27% people watch OTT, Majority of the OTT viewers between the age of 18-35, prefer Hotstar, followed by Amazon Prime and Netflix

* Of those who watched the ICC T20 World Cup, 48% believe poor team selection purposed India’s average performance in the tournament

Axis My India, a leading consumer data intelligence company, released its latest findings of the India Consumer Sentiment Index (CSI), a monthly analysis of consumer perception on a wide range of issues. The month of November reveals an increase in household spends and mobility for a majority of the population. Consumption of health-related items has increased or remained the same for majority of the families

The December net CSI score, calculated by percentage increase minus percentage decrease in sentiment, was down to +8, from +9 last month and first time slight dip in the net score is observed since past 4 months, a reflection of the post-festive period sentiment.

This month, Axis My India’s Sentiment Index also delved deeper to understand consumer’s consumption in the digital ecosystem in terms of OTT platforms, language preferences. Consumer sentiment was also tracked to understand their expenses in terms of discretionary products and investment preferences. In addition, the survey tracked consumer’s opinion on India’s performance in the T20 Word Cup.

The surveys were carried out via Computer Aided Telephonic Interviews with a sample size of 10552 people across 36 states. 64% belonged from Rural India while 36% belonged from urban counterparts.

Commenting on the November report, Pradeep Gupta, CMD, Axis My India, said, “With the year approaching to an end, we witness consumer’s gradual return to normalcy though a slight drop in Net Promoter Score also demonstrates that the impact of festive spending is slowly tapering. While media consumptions remain standard for majority, our CSI Survey has further revealed that consumers from the north as well as the south favour vernacular languages when engaging with the digital mediums. This insight opens up opportunities for various local as well as national and international players in terms of where & in which form to place their brand content and advertisements.  Moreover it is interesting to note that inspite of a plethora of new age tech firms coming up with IPOs, Indian consumers still prefer to park their confidence in established companies and Government owned stocks and shares, providing a contrarian approach to the FOMO investing theory”

·          Overall household spending has increased for 62% of families which reflects a 1% decrease from the last month. This increase is majorly reflected in the northern part of India

·          The increase in spends on essentials like personal care & household items stands at 49% showcasing a surge in the north and south of India. The net score which was +27 last month remains the same for this month. Percentage of families whose consumption remain same as last month has increased by 2% from last month.

·          Spends on non-essential & discretionary products like AC, Car, Refrigerator has increased for 15% of families. While the increase in non-essential spends has decreased by an overall 3% from last month. The net score therefore which was at +9 last month has reduced to +6. The increase in spends is however identified in north and eastern part of India

·          Consumption on health-related items has increased for 42% of families which overall represents the lowest percentage in the last three months. The health score which has a negative connotation i.e., the lesser the spends on health items the better the sentiments, has a net score value of -25.

·          Consumption of media remains the same for a majority of 52% families which reflects the highest percentage since the last four months and is majorly from the south of India. Consumption has increased for 22% of the family, majorly from east and north, majorly amongst 18YO-25YO and 26YO-35YO. Overall, the Net score of this month is at -4 as compared to -2 for the previous month.

·          81% families said that they are going out the same for short vacations, mall and restaurants as compared to last month. This represents a steady increase in movement from 78% in August to 3% increase in November. Increase in movement is majorly seen in the south of India and the least in the North. Increase in mobility is further seen concentrated among the 18YO-25YO. The overall mobility score is at -5.

·        Axis My India further gauged consumer’s sentiment on their digital behaviour. A combined 27% said that they prefer engaging with websites and mobile applications in Hindi and other regional languages while 24% preferred English. Moreover it was identified that 31% of the population that resides in the southern part of India prefers using apps and websites in the English language, whereas 27% in the northern belt prefers engaging with Hindi based apps and networks. In addition, regional language based apps and sites reflected the choice of southern India at 34%. In addition it was discovered that majority of the youngsters (60%) amongst 18-25 prefer digital interactions in English, whereas those above 51 prefer Hindi and other regional languages.

·        When asked if they spend time watching content on OTT or video streaming platforms, only 27% said yes whereas 73% reflected their view otherwise demonstrating the scope of penetration. Majority of the viewers are of the age of 18-35. Of the people who prefer OTT content, a majority directed their choice towards Hotstar followed by Amazon Prime and Netflix.

·        In terms of investment choices in stock and shares, 17% and 12% showcased their preference towards Private Companies and Government owned respectively. Only 1% said they preferred to invest in IPOs, contrary to the euphoria around new generation IPO’s

·        Capturing consumer indulgence, Axis My India survey showcased that only 7% bought discretionary product this month like AC, TV, Fridge etc. Out of which 34% further claimed to have bought a 2-Wheeler, whereas a mighty 21%, 18% and 9% have spent on Television, Fridge and Car respectively.

·        Gauging views around Team India’s average performance in T20 World Cup 2021, the survey further discovered that out of those who have watched ICC T20 WC, 48% believe that it is due to the team selection while 23% believe it was a result of player fatigue.

Posted by editor-manu-sharma at 4:08 PM