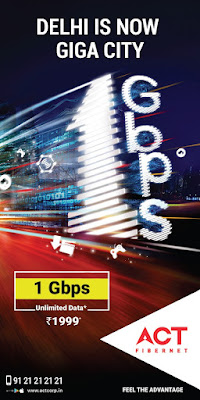 ACT Fibernet is a pioneer of GIGA speeds in India launching GIGA for the first time in India in Hyderabad in 2017. Since then GIGA is available across multiple cities with ACT Fibernet.  With increased usage of home broadband for streaming, gaming, work from home, learn from home and with so many more devices being simultaneously connected to the internet, customers are looking for more from their home broadband. GIGA Speeds will ensure that heavy usage customers are able to get seamless connectivity for all their daily internet needs.

ACT Fibernet is powered by revolutionary new Smartfiber® technology which creates VIRTUAL dedicated speed lanes, ensuring that a customer gets his plan speeds 24*7. Assured. So with ACT Fibernet, you don’t get ‘upto’ speeds, but FULL SPEEDS. This technology advancement has helped ACT Fibernet in being recognized as DELHI’s Fastest Wired broadband provider #based on analysis by Ookla® of Speedtest Intelligence® data for average download and upload speeds. With the launch of GIGA plan, customers can be assured that they will get full 1 Gbps speeds to download and 1 Gbps speeds at upload.

Speaking on the launch Saurabh Mukherjee, Chief Operating Officer, Atria Convergence Technologies Ltd. said, “With home broadband usage skyrocketing high speed, reliable and stable home internet access is the need of the hour. The launch of our 1 Gbps Speeds in Delhi will help the citizens of Delhi especially high usage customers to get a seamless internet experience. We also believe that this GIGA plan will immensely aid working from home professionals and small and medium offices which rely upon high data transfers, real-time cloud connectivity, graphics and animations and other such new-age industries to work seamlessly.”

Saurabh further added, “In order to cater to needs to a wider segment of the population, we are also launching an affordable ACT Welcome plan. with this, we are confident ACT Fibernet will transform the way internet is now being consumed at large.”