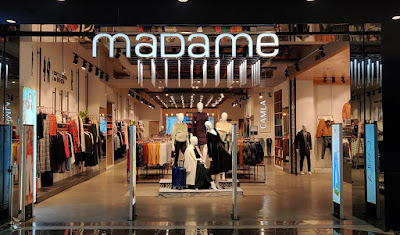 Leading fashion brand Madame has created a whimsical and nostalgic collection inspired by Tom & Jerry, one of the world’s most famous cartoon franchises. Launched in collaboration with Warner Bros. Consumer Products, Madame's Tom & Jerry collection is an ode to the hilarious cat and mouse ‘frenemies’, and showcases a selection of edgy graphic tees and denim pieces featuring the timeless cartoons.

With the 90’s and 2000’s fashion making a well-deserved comeback in 2021, the era of eye-catching graphic tees and cut out jeans paired with a smart denim jacket is slowly making its way back into vogue. Madame’s Tom & Jerry collection is a visual representation of 90’s nostalgia, featuring a collection of striking, edgy graphic tees and denim fashion pieces featuring the two of the most timelessly playful cartoon characters to ever exist.

This iconic fashion range consists of a wide variety of casual pieces such as tees, jackets, shorts, dresses and jumpsuits - a complete range for the modern, whimsical woman who fancies a touch of mischief inspired by her childhood.

Now that 90’s trends are coming back into fashion, the apparel industry for the modern woman is seeing a surge in retro prints, cuts and silhouettes. This collection aims at seamlessly reintroducing the iconic trends of puffed sleeves and elasticated hems into modern everyday wear to create a look that is effortlessly trendy and sits perfectly between the past and the present.

A clothing brand that first emerged as a crowd favourite owing to its winter wear collection, the colour palette of this range is derived by subtle, classic winter hues such as dusty pink, cream and mauve. Madame’s Tom & Jerry apparel collection amalgamates everyday fashion basics with chic, mood-boosting elements to create a clothing range fit for the woman who fancies a piece or two in her wardrobe that’s layered with classic quirkiness. The collection retails for Rs. 1199 to Rs. 2999, making it accessible to women with any budget, low or high.

Commenting on her creative process for this collection, head design at Madame, Parika Rawal, said, “The idea of creating a playful collection like this came to me while I was flipping through channels on my TV and caught a glimpse of The Tom & Jerry Show. When you think of 90’s nostalgia, this cartoon show is one that every man, woman and child has watched at some point in their lives - either by themselves or with their little ones. That was when I decided that if I had to pick a theme for my new collection, there couldn’t be one more iconic or more widespread than these beloved cartoon characters. Clothing is an expression of your personal style - and this energetic collection is meant to bring out the child in you, through fashion.”

While expressing his views on the launch of this playful collection, Akhil Jain, Executive Director, Madame, commented, “No longer is the modern woman limited in terms of choices when it comes to personal fashion. With the Tom & Jerry collection, we are celebrating the bold, playful, iconic women who don’t shy away from making standout fashion choices and who let their personal style do the talking for them.”

“Tom and Jerry are undoubtedly two of the best loved characters in India. Everyone, no matter what age you are, has grown up watching the classic duo in action. We’ve loved working with Madame on this collection which perfectly captures the cartoon’s unique energy and sense of fun,” added Vikram Sharma, Head of Consumer Products, Advertising & Partnerships at Warner Media India, Southeast Asia & Korea. In India, Warner Bros. launched Tom & Jerry: The Movie in cinemas in February while the franchise’s TV series are available on Cartoon Network.

The Tom & Jerry collection is available on https://www.glamly.com/

First launched in the year 1993, Madame opened its first store in 2002 and since then has made its presence in over 150 exclusive brand outlets across India and 600 multi-brand outlets. The brand was awarded the ‘Most Admired Retailer of The Year: Fashion and Lifestyle’ at the Images North India Retails awards in 2018. With rigorous expansion plans on the horizon, Madame has been headquartered in Gurugram since 2017 and has witnessed a demand surge especially in Tier II cities, having opened six new stores in the unlock phase.