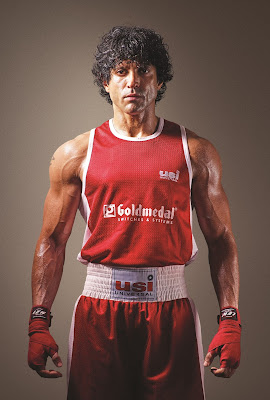 * Prime members in India and across 240 countries and territories can stream Toofaan exclusively on Amazon Prime Video starting July 16, 2021

Goldmedal Electricals, a leading home-grown fast moving electrical goods (FMEG) company has entered into a brand association with the upcoming inspirational sports drama, ‘Toofaan’. Presented by Amazon Prime Video in association with Excel Entertainment and ROMP Pictures, Toofaan is an inspiring sports drama produced by Ritesh Sidhwani, Rakeysh Omprakash Mehra and Farhan Akhtar. The film’s high-octane trailer takes us through the journey of a local goon, Ajju Bhai becoming a professional boxer, Aziz Ali. Toofaan is a tale of hope, faith and inner strength fuelled by passion and perseverance. The film will premiere on Amazon Prime Video on 16th July across 240 countries and territories.

Goldmedal's rationale behind associating with Toofaan is in line with its passion of making innovative, world-class products that create amazing lifestyles. The main protagonist in the movie perseveres against all odds to follow his passion and thus achieve his goals – it’s the story of an amazing turnaround against insurmountable challenges.

Goldmedal is a brand that is passionate about the quality of products it manufactures. Whether it is modular switches or home automation products, LEDS, fans, or wires and cables, Goldmedal products are designed to make the life of its consumers significantly better through these high-quality products. The story of Toofaan encapsulates this inspiring vision to be passionate about one’s belief and to make the amazing happen.

Commenting on the partnership, Mr. Kishan Jain, Director, Goldmedal Electricals said, “We are extremely excited to celebrate our association with one of the most awaited movies of the year, ‘Toofaan’. It gives us tremendous pleasure to be part of a movie directed by Rakeysh Omprakash Mehra, who has been an amazing storyteller over the years, along with Farhan Akhtar, who has been part of so many inspiring films and is tremendously popular among people from all walks of life.  We at Goldmedal hope to associate with similar films that combine entertainment with the values that we believe in.”

Vishal Ramchandani, Head of Business and Marketing at Excel Entertainment shared his thoughts on the association, “Toofaan is a story that will provoke and inspire everyone to make the right choice and fight against all odds. We are thrilled to be associating with a leading brand like Goldmedal on this one!”

Goldmedal Electricals is hopeful that such associations with leading Bollywood movies will help the brand enhance its brand visibility among its pan India consumer base and also act as a catalyst to continue exploring more such associations in the future.

Goldmedal Electricals is a home grown electrical company which was established in the year 1979 with a vision to create electrical switches and accessories that make a positive difference to the lives of consumers. The company is known in the industry for manufacturing high quality wiring devices and introducing a host of innovations in the industry. The company has manufacturing units in Vasai outside Mumbai, Bhiwadi in Rajasthan, and Vijayawada in Andhra Pradesh. It is one of the few companies in the industry to have a completely in-house, state-of-the-art tool room and testing facility. Today, the company manufactures a vast range of electrical products including various types of Switches, Home automation systems, Fans, Security Systems, Entertainment devices, Doorbells, Wires, Cables and more for residential buildings as well as commercial establishments.

Under forced circumstances, an orphan boy born from the streets of Dongri, grows up to be a local goon. His life changes when he meets a bright and a compassionate young woman named Ananya who guides him to take the right path. With love and guidance, he finds his calling in sports and takes up the journey into becoming a world class Boxer. This is an inspiring story. Even the poor and marginalized, beaten by life circumstances, can become the heroes of the nation by giving up the other part of life and adopting the right path. Toofaan is set in Bombay. The city of Bombay is like the third character of the film. Bombay is Megapolis and one of the greater cities in India. It is a true cosmopolitan city and a melting pot for various cultures and religions. Mumbai runs on the spirit of Mumbaikars. This “spirit” is indeed Mumbai’s proudest possession which we also see in our film through our characters.

Prime Video is a premium streaming service that offers Prime members a collection of award winning Amazon Original series, thousands of movies and TV shows—all with the ease of finding what they love to watch in one place.  Find out more at PrimeVideo.com.

●        Enhanced experiences: Make the most of every viewing with 4K Ultra HD- and High Dynamic Range (HDR)-compatible content. Go behind the scenes of your favourite movies and TV shows with exclusive X-Ray access, powered by IMDb. Save it for later with select mobile downloads for offline viewing.

●        Included with Prime: Prime Video is available in India at no extra cost with Prime membership for just ₹999 annually.

Excel Entertainment's oeuvre comprises of a string of box-office hits like Dil Chahta Hai, Don, Zindagi Na Milegi Dobara, Talaash & Fukrey. Alongside these blockbusters, Excel has also launched avant-garde ventures like Gully Boy, India’s first hip hop film and the official entry to the Academy Awards this year and Inside Edge, India’s first original series on Amazon Prime Video that was nominated for the coveted International Emmy Awards under the Best Drama category in 2018. In addition to commercially successful cinema, Excel has consistently garnered critical acclaim, Rock On being one such accomplishment that won the production house its second National Award in 2008.

Since its inception in 2004, Rakeysh Omprakash Mehra Pictures (ROMP) has strived to create films that prize quality content above everything else. We tell stories that connect every viewer on an instinctive level through exploring the intricate web of emotions that form the human experience. Under ROMP’s banner, its films, Rang De Basanti, Bhaag Milkha Bhaag and Delhi-6 have gone on to win critical, national and international acclaim for the socially impactful stories they tell. Our main aim at ROMP Pictures is putting out work that is reflective of the evolving culture and at the same time retain the timelessness of a story.

Posted by editor-manu-sharma at 8:00 PM