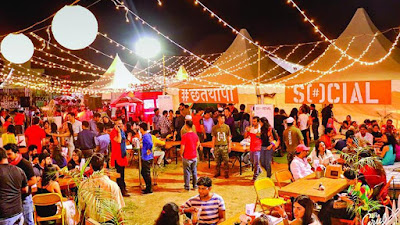 After introducing eco-friendly and reusable cups at U2: The Joshua Tree Tour, an initiative that was applauded by consumers on-ground and across social media, BookMyShow, India’s leading entertainment destination, has taken yet another step towards making live entertainment experiences not just enjoyable but also environment-friendly and sustainable. At the recently concluded edition of The Grub Fest in Mumbai, BookMyShow partnered with event waste management agency ‘Skrap’ for reducing environmental impact through sustainable waste management.

BookMyShow along with Skrap collected over 300 kgs of excess edible food from over 60 food stalls across two days at The Grub Fest, Mumbai. With the help of donation partners Feeding India, the excess food was collected and packed hygienically and then distributed to on-site workers as also low-income communities across the suburbs of Mumbai. The initiative helped BookMyShow restrict food wastage as also enable its reach to needy & deserving communities in the city.

The Grub Fest also witnessed an end-to-end waste management system for all waste generated during the event including compostable plates, food scraps, plastic bottles, paper cups, cardboard boxes, etc through a two-bin waste segregation system that was set up. The system was installed at the festival’s Mumbai venue, where food stalls and the housekeeping team worked together to participate in this initiative. With consolidated efforts, around 1.5 tonnes of recyclable waste was segregated, sorted and forwarded to a collection & processing centre along with 1.3 tonnes of biodegradable waste that was sent for composting. Additionally, over 250 kgs of non-recyclable materials were sent to the processing centre as co-processing waste for cement factories.

All these measures collectively led to 90% of the waste generated at The Grub Fest getting diverted away from the landfills. Post a successful initiative to make The Grub Fest Mumbai a sustainable entertainment experience, BookMyShow will replicate this initiative at The Grub Fest – Bengaluru on February 22nd-23rd.

After satiating the appetite of over 45,000 patrons across Delhi and Mumbai, BookMyShow will introduce Namma Bengaluru to the first ever edition of ‘The Grub Fest’ this weekend. With delectable Indian and global cuisines, foot-tapping music, and unlimited entertainment, India’s premier entertainment and food festival will find a home at Bengaluru’s Jayamahal Palace Hotel.

The festival is poised to attract tens of thousands of visitors in Bengaluru over the weekend, bringing together the best of food and entertainment. Patrons in Bengaluru will get a chance to experience live performances headlined by artists including Juggy D, Lisa Mishra, Anand Bhaskar Collective, Best Kept Secret, When Chai Met Toast and Lagori, whilst indulging in gut-friendly finger foods, vegan choices and fusion dishes.

Bengaluru’s maiden edition of The Grub Fest will be followed by a much-awaited debut in Kolkata on March 7-8 at PC Chandra Grounds. Marking the culmination of the fest, this ultimate out-of-home entertainment and gourmet experience will make its way back to Delhi on April 3rd-4th at The JLN Stadium.
Posted by editor-manu-sharma at 9:23 PM