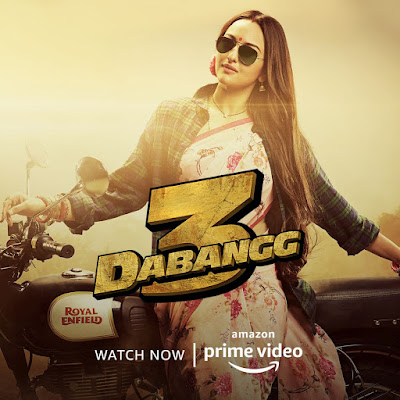 For Salman Khan fans, this Valentine’s Weekend is going to be even more special as Amazon Prime Video today announced the digital premiere of Bollywood’s most loved action comedy Dabangg 3.Directed by Prabhu Deva and starring Salman Khan, Sonakshi Sinha and Saiee Manjrekar,  the plot of Dabangg 3 revolves around the origin of Chulbul Pandey, and the circumstances that led him to go from Dhakkad Chand Pandey, to the eccentric Robin Hood of Uttar Pradesh. Prime members across 200 countries and territories can stream the third installment of the Chulbul Pandey film starting 15th February, 2020.

Commenting on the film, Salman Khan said “The Dabangg franchise has been very special to me – Chulbul Pandey’s character has become a favorite with my fans across the world! I am thrilled that Prime Members globally can now catch this movie on Amazon Prime Video. This Valentine’s Day weekend watch Chulbul and Raijo’s evolving love-story, coupled with the incredible action and humour one has come to expect from the Dabangg franchise.”

A circumquel to the 2010 film Dabangg and 2012 film Dabangg 2, this third installment of the Dabangg film series showcases the corrupt yet much loved Chulbul Pandey`s origin as a police officer after an encounter with his old rival named Bali Singh refreshes his memory.