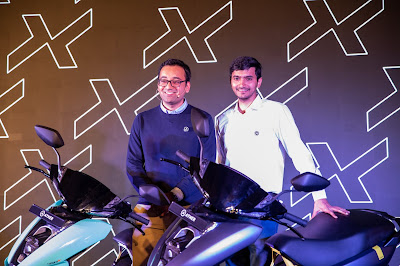 In January, the company had confirmed its launch in the following markets basis the demand received for the scooter- Delhi NCR, Mumbai, Pune and Hyderabad. Since the national launch, Ather has received thousands of pre-orders from across the country, with key cities like Ahmedabad, Kochi, Coimbatore & Kolkata taking the lead.

The four new cities will see installation of fast charging infrastructure in the coming months, followed by the delivery of the scooters. Ather 450X can be pre-ordered via the company website for a fully refundable INR 2500. Ather has also been receiving dealership requests from these cities which will make it easier for the company to rapidly expand.

The Ather Forum has been abuzz with requests for the company’s community engagement programs to begin in cities beyond the metroes. Consumers in the new cities can expect to see meet ups and test rides being conducted in their neighborhood in the coming months.Along with fast public chargers, Ather 450X owners will receive home chargers, Ather Dot so they can conveniently charge their scooters at home.

Tarun Mehta, CEO and Co-founder Ather Energy : There’s been an amazing response for the Ather 450X across the country. We have been receiving pre-orders from not just the major metros but also several Tier II & III cities. Similarly, there have been more than 2000 requests for retail partnerships. By the end of this year we will be present in ten cities and will continue to scale up to more than 30 cities by 2023. Our only focus now is scaling the experience of Ather 450X to all over the country.

The super scooter is a significant step-up from Ather 450 with improvements across multiple key parameters. Ather 450X is the outcome of award-winning design philosophy and is quicker, more intelligent than its predecessor and comes in three new colors; Grey, Green, and White. The scooter is powered with a 6kW PMSM motor, a new 2.9 kWh lithium-ion battery and comes with 4 riding modes. In addition to Eco, Ride, and Sport, Ather is introducing a new high-performance mode, 'Warp'. Ather 450X can go from 0 to 40 kmph in just 3.3 sec in the Warp mode, making it the quickest electric scooter in its category and the perfect choice to navigate through city traffic.

The revolutionary improvement in its battery has enabled a projected Indian Drive Cycle (IDC) range of 116 km and a real-life range of 85 km in city conditions. Ather 450X will also charge 50% faster than before at 1.5km per minute, making it the fastest charging rate in the electric two-wheeler category.

Ather 450X will have a 4G SIM card along with Bluetooth connectivity, allowing riders to manage phone calls and music on the touchscreen dashboard. The new 7” touchscreen dashboard, comes with a color depth of 16M and a Snapdragon Quad-Core processor. Ather 450X utilizes Android Open Source to offer map navigation, On-board diagnostics and other unique features like Over-the-air updates, Auto Indicator off and Guide-me-home lights.