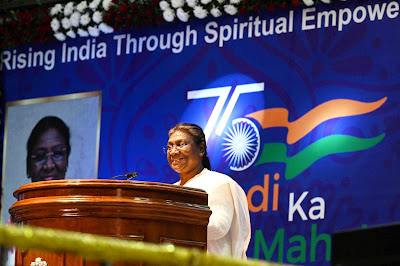 The Brahma Kumaris World Spiritual University has announced “Mission Meditation” in Bengaluru that starts in January and will culminate into a larger conglomeration of people in the coming months. This will be the biggest meditation drive ever held in the country! Sister Leela (Head of the Bangalore Zone) stated that “Through this campaign we aim to teach people the unique method of ‘Just-A-Minute-Meditation’ that has proven to bust stress, improve efficiency, and stay focused while performing daily tasks”. The Brahma Kumaris World Spiritual University is the world’s biggest women-led spiritual movement spread across 137 countries and is famous for teaching Rajyoga Meditation.

Seeing what the world has gone through in the last three years it is imperative that every human being takes time out and rediscovers himself all over again to find inner peace. In today's turbulent times when emotional and mental stress is a common occurrence, the organization hopes to provide some sort of a practical relief to everyone through this meditation that they can perform even while doing daily tasks. While brushing your teeth, waiting for the kettle to boil, stuck in traffic, waiting for the computer to start, etc. The just-a-minute technique has proven successful in transforming ‘wasted time’ into ‘time for me’ that ultimately brings enjoyment even to the simplest of tasks.

The aim of ‘Mission Meditation’ is to make meditation easy and accessible for anyone to meditate anywhere in just a minute! About 150 Meditation Centers of the Brahma Kumaris spread across Bangalore will be participating in this life-changing altruistic mission.

Bangaloreans can go and experience this on their own without any financial burden.

Bengaluru centre head Sister Leela said, “I request every Bangalorean to come and be a part of this movement and find oneself through inner peace via meditation. There is no better way to find solace than reinventing the self”.

Very recently, the Honourable President of India - Droupadi Murmu visited the Headquarters of the organization in Mount Abu and flagged off the RISE campaign (Rising India through Spiritual Empowerment). Even our beloved PM Shri Narendra Modi has highly appreciated the efforts of the entire team from Brahma Kumaris in uniting the youth towards meditation and also propagating cleanliness through the “Swachh Bharat” campaign.

Brahma Kumaris was founded in 1937 by Dada Lekhraj Kripalani, a retired Indian businessman, in Hyderabad, a city now in Pakistan. His spiritual name is Prajapita Brahma and he is lovingly called Brahma Baba. After experiencing a series of visions in 1936, he was inspired to create a school where the principles and practices of a virtuous and meditative life could be taught. Last week the institution also celebrated the 54th death anniversary of Brahma Baba . The original name of the organisation was 'Om Mandali'. Back then it consisted of only a handful of men, women and children, many of whom decided to stay together as a community. However, now the Brahma Kumaris has spread to over 137 countries on all continents and has had an extensive impact in many sectors as an international NGO.