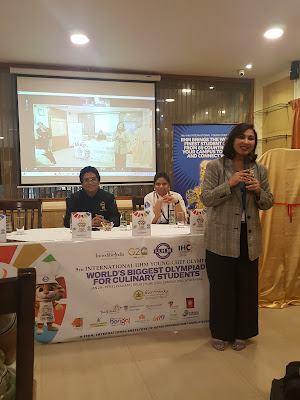 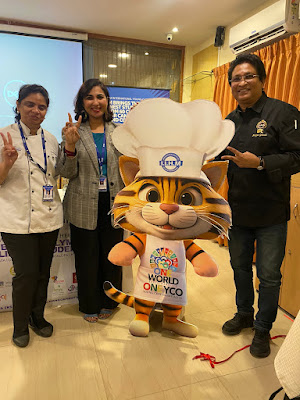 * To commence on January 31st in Bangalore/Hyderabad.

IIHM YOUNG CHEF OLYMPIAD 2023 (YCO 2023) is a unique competitive event being held for the ninth time since its inception in 2015, with around 60 countries participating this time. Held under the auspices of the International Hospitality Council, UK, the competition is organized by IIHM, a part of the Indismart Group which is a large conglomerate that operates the IndiSmart Hotels and offers a wide range of services in the field of Hospitality Management Education Training and Consultancy in India and South East Asia.

IIHM has announced the schedule of YCO 2023, which is as follows:

After being held in a virtual format for the last two editions, the International Young Chef Olympiad is back in its physical format this time. The 9th YCO is being held between Sunday, 29th January, and Saturday, 4th February 2023 in five cities across India. The Grand Opening Ceremony takes place in Delhi on Sunday, 29th January. The First Round of the competition will take place over the next two days with competitors being split into groups and competitions will be held at in either Delhi, Bangalore, Pune, Hyderabad, or Goa. Following Round 1, all the competitors and mentors will be travel to the cultural city of Kolkata for the next stage of the Olympiad. The leading 10 competitors from Round 1 will compete in the Grand Finale; the next 10 competitors filling the 11th to 20th positions will compete for the Plate Trophy and the remaining competitors will take part in the Dr. Suborno Bose Challenge. The 9th International Young Chef Olympiad looks all set to be the mega culinary competition and conclave of the year.

The Grand Finale’s Gold, Silver, and Bronze Medallists; the Plate Trophy Winner; the YCO Dr Suborno Bose Challenge Winner and all other Award Winners will be announced at the Closing Awards Ceremony on the evening of 4th February 2023. The Gold winner will be awarded a US$ 5,000 prize, the Silver winner will bag US$ 3,000, and the Bronze winner $2,000 respectively.

The mascot of YCO has been unveiled too. This time it is the Tiger Chef, to inspire all the young aspirants to do their very best in the competition.

IIHM (International Institute of Hotel Management) is one of the largest chains of premier hospitality and hotel management schools across India that started its journey in 1994 in Kolkata. IIHM is a part of Indismart Group, the conglomerate that operates Indismart Hotels. IIHM campuses are located across eleven National and International cities with the associate institute IAM-IHM located in Kolkata, and Guwahati. Students passing out of IIHM are armed with an international degree from the University of West London and equipped with global hospitality skills that enable easy placements in any hospitality brand across the world. IIHM is dedicated to its pursuit of excellence in teaching and placements. Real time experience is the key to success in hospitality and that makes the institute popular. In recent years, IIHM has been instrumental in organizing the World’s biggest Culinary Olympiad Young Chef Olympiad, with the participation of over 50 countries, a unique idea, and an initiative inviting young culinary talents across the world. It has MoUs with over 50 countries for student and faculty exchange bringing the best of education to its students from around the World.

The institute has bagged several prestigious awards in the past 29 years. The list includes the Best Education Brand Award from Economic Times consecutively in 2017, 2018, 2019 and 2020. It was also featured in Forbes Magazine as Great Indian Institute and Great Place to Study consecutively in the year 2018 - 2019 and 2019 - 2020. IIHM was also awarded as one among the World's Greatest Brands & Leaders 2015-16 by URS International (IMEA - Process Reviewer PriceWaterhouseCoopers PL) and also received the Best Institute in Hospitality Education 2017 Award by Assocham from Dr. Mahendra Nath Pandey, Hon'ble Minister of State for HRD (Higher Education), Govt. of India.

Posted by editor-manu-sharma at 7:02 PM