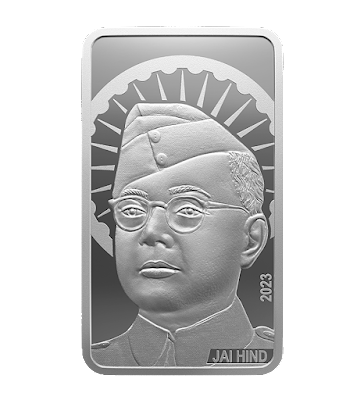 * The 999.9 purest silver bars will be available online, at all MMTC PAMP exclusive stores and at prominent jewellers across India

Commemorating the 126th birth anniversary of Netaji Subhas Chandra Bose, MMTC-PAMP, India’s only London Bullion Market Association (LBMA) Good Delivery gold & silver refinery, has introduced a new product in its range of silver portfolio, with the launch of exquisitely crafted 999.9 purest ‘Netaji’ silver bar in 50g denomination. His birth anniversary is known as ‘Parakram Divas’ and is celebrated to inspire people of this country, especially the youth, to act with fortitude in the face of adversity.

An Indian freedom fighter and revolutionary, Subhas Chandra Bose was also popularly known as Netaji. This title was conferred to him by Indian and German officials at the Special Bureau of India in Berlin.

“It is only on the basis of undiluted nationalism and of perfect justice and impartiality that the Indian Army of Liberation can be built up.”

This exquisitely crafted silver bar is a special edition tribute to the selfless service of the firebrand freedom fighter and a memento of his courage and resilience. Crafted from pure silver, this 50g bar features an intricate depiction of Netaji on one side and the mention of the 126th Parakram Divas along with the coin’s 999.9 purity credentials on the other.

Speaking on the launch, Vikas Singh, Managing Director and CEO, MMTC-PAMP said, “Our legacy, culture and heritage are of extreme importance to us and we at MMTC-PAMP always strive to offer the most culturally relevant products to our consumers. This bar is a symbol of courage and national spirit, honouring the sacrifice and dedication of the great leader.  Serving as a timeless reminder of Netaji's contributions and his ideals, this bar is a must-have for collectors and history enthusiasts. This is MMTC-PAMP’s humble attempt to celebrate the life and legacy of Netaji on Parakram Divas.”

These bars are crafted to the highest standards using unmatched Swiss Craftsmanship and are ideal for collectors and gifting purposes. Indians have always had a glittering love affair with gold and silver. MMTC-PAMP’s latest addition to its minted portfolio, the 999.9 purest silver limited edition Netaji bars has been crafted in limited quantity for the discerning customer.

To ensure the product’s authenticity, each MMTC-PAMP product carries a unique number and comes packaged in an assayer-certified CertiCard. Each gold and silver product bought from MMTC-PAMP offers positive weight tolerance, which guarantees that every coin or bar you buy weighs more than the listed weight, ensuring customers get the highest value for their investment.

About MMTC PAMP: A joint venture between Switzerland-based bullion brand, PAMP SA, and MMTC Ltd, a Government of India Undertaking, MMTC-PAMP seamlessly marries Swiss excellence with Indian insights. MMTC-PAMP India Pvt. Ltd. is internationally recognized as an industry leader in bringing global standards of excellence to the Indian precious metals industry. We have received several awards since our inception from local and global industry bodies for the transparency and sustainability that we rigorously uphold in our sourcing, refining and supply of precious metals in the Indian market. MMTC-PAMP is the only LBMA-accredited Gold & Silver refinery in India and is accepted across global commodity exchanges and central banks.

Posted by editor-manu-sharma at 8:38 PM