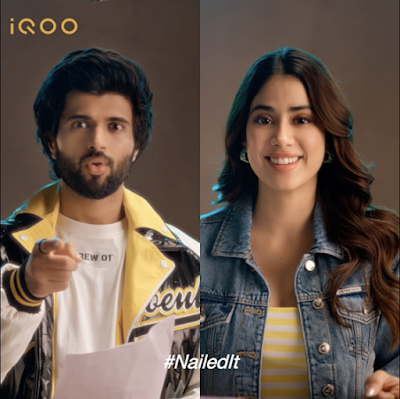 Dentsu Creative India  has launched a uniquely self-aware brand film for iQOO, one of India’s fastest growing smartphone brands. The film stars Vijay Devarakonda and Janhvi Kapoor where they are taking a dig at iQOO’s eccentric brand problem - no one gets their name right. And this is despite them being India’s no. 1 smartphone brand in terms of user satisfaction. The film showcases BTS moments where they are hilariously struggling to find the correct pronunciation of the brand. The whole concept cements the fact that while the world gets their name wrong, they get one thing right - user satisfaction.

Based on the contest run by iQOO on their social platforms, it was found that most of the users were mispronouncing the brand name as ikku, eyekyun, IQ, IQ double O, etc.

The film was created in response to a contest run by iQOO on their social media platforms where they asked users to tell how they pronounce the brand name. Most of them mispronounced it as ikku, eye kyun, IQ, IQ-double-O, ICOOOH and more.

The film will be promoted across multiple social and digital platforms.

Link to the brand film: https://youtu.be/aOo_hH_X_z4

Speaking about the film, Mr. Nipun Marya, CEO, iQOO India, said, “We are excited to launch this brand pronunciation awareness film with the hope that we will build a stronger relationship and instill confidence in our consumers who are at the heart of our business.Through this, we intend to create a sense of community and cheerfulness around this common conundrum and hope that our customers will be able to proudly speak about our products and services with their family and friends.”

Speaking about the film, Ashit Chakravarty, Managing Partner, Dentsu Creative said, “It is rare for a brand to be honest and bold about how its name is frequently mispronounced. Kudos to the entire IQOO team for being bold and turning what is a unique problem into an opportunity. The idea for us was to always stay true to the story that we are India's no. 1 smartphone brand in terms of user satisfaction, but people just don't seem to get our name right”.

Speaking about the film, Shray Chawla, Senior Creative Director (Copy), Dentsu Creative said, “It's funny how an internal joke can become a "self-troll" campaign if the brand is bold enough to make fun of itself. I think we found the perfect pairing in Vijay and Jahnvi to bring iQOO's story alive on screen. The story of being India's no. 1 smartphone brand in terms of user satisfaction that often gets mispronounced as IQ, EQ, ikku, IQ-zero-zero, eye-kyun and what not. We realized that everyone has a unique way of saying iQOO and for us a brand this is not really a big problem if we can joke about it”.

Not just this, iQOO has a surprise for its consumers embedded in the brand film. This brand film will be followed by another film where Vijay and Janhvi will be exclusively presenting and unboxing the upcoming flagship smartphone - iQOO 11, but with a hilarious twist. iQOO 11 is iQOO’s upcoming premium flagship smartphone that has globally been acclaimed for some World’s first powerful and performance-oriented features. The smartphone has already created a lot of hype in the Indian market and is expected to launch in India anytime soon.

Director (of the film): Nilay Singh