IMDb Announces The Most Popular Indian Stars Of 2022 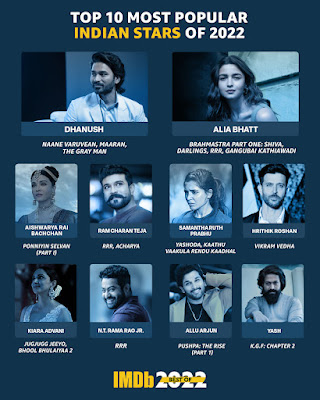 IMDb, the world's most popular and authoritative source for movie, TV, and celebrity content, today announced the Most Popular Indian Stars of 2022. IMDb determines its definitive Top 10 lists based on the actual page views of the more than 200 million monthly visitors to IMDb. Dhanush is this year's top-ranked celebrity, fueling fan interest with multilingual successful releases including The Gray Man and Thiruchitrambalam.

IMDb Most Popular Indian Stars of 2022*

*The IMDb Top 10 Most Popular Indian Stars of 2022 list is comprised of stars who consistently ranked the highest on the IMDb weekly ranking chart throughout 2022. These rankings are based on the actual page views of the more than 200 million monthly visitors to IMDb worldwide.

“People around the world turn to IMDb to learn more about Indian cinema, web series, and stars, and our Top 10 list of Most Popular Indian Stars has established itself as the benchmark for determining global popularity and recognizing career milestones and breakthrough moments,” said Yaminie Patodia, head of IMDb India. “Artists across varied regions are being celebrated worldwide, which is a testament to the magnitude of talent across the country. While actors like Dhanush are being recognized and paired opposite Hollywood stars like Ryan Gosling and Chris Evans, we also witnessed N.T. Rama Rao Jr. and Ram Charan Teja being celebrated for the magnum opus film, RRR. Actress Aishwarya Rai Bachchan’s return to films also received widespread appreciation by critics and fans.”

Speaking exclusively with IMDb, Alia Bhatt shared her appreciation for inclusion in this year’s list, saying, “2022 has by far been the most memorable year I’ve had at the movies—I am forever thankful and grateful for the love the audience gave all my films this year and feel honoured to have collaborated with our country’s finest filmmakers and artists. IMDb is a true testament of the people’s voice and I hope I can continue to entertain the audience for as long as I face the camera! Love and light. Thank you once again.”

Additional information about this year’s Most Popular Stars:

Dhanush (No. 1) appeared in five titles in 2022; the Netflix original The Gray Man, and Tamil releases Maaran, Thiruchitrambalam, Naane Varuven, and Vaathi.

Bhatt also delighted fans by leading Gangubai Kathiawadi and starring in Darlings (which she also produced for Netflix), as well as playing Isha in the global hit Brahmastra Part One: Shiva.

Entertainment fans were eager for Aishwarya Rai Bachchan’s (No. 3) returned to cinema after five years, with her standout performance in Ponniyin Selvan: Part I.

IMDb is the world's most popular and authoritative source for information on movies, TV shows, and celebrities. Products and services to help fans decide what to watch and where to watch it include: the IMDb website for desktop and mobile devices; apps for iOS and Android; and X-Ray on Prime Video. IMDb also produces IMDb original video series and podcasts. For entertainment industry professionals, IMDb provides IMDbPro and Box Office Mojo. IMDb licenses information from its vast and authoritative database to third-party businesses worldwide; learn more at developer.imdb.com. IMDb is an Amazon company. For more information, visit imdb.com/press and follow @IMDb_in.