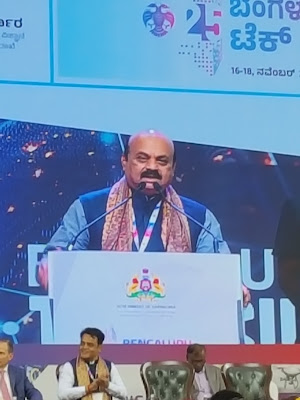 The new high-tech cities - to be built in Hubbali, Dharwad, Mysuru, Mangaluru, central Karnataka and near Bengaluru in six months - would be promoting science, technology and innovative ideas for the growth of Karnataka, Bommai further said in his address.

The chief minister also said these will include a knowledge city, a science city, and a tech city near the Bengaluru airport. These, he said, will have the best research and development centres as well as other industries.

He said that the park will cater to sectors ranging from agritech to aeronautical technology. The Chief Minister stated that plans for this park will be laid out within the next six months. “With this, I think the tech summit will get a great fillip,” he said.

The state government will also set up six new high-tech cities across the state to "promote the growth of knowledge and technology sectors in the state," Bommai said. These will be located in Kalaburagi, Hubballi, Dharwad, Mangaluru, Mysuru, and Bengaluru.

"The decision to build a startup park and high-tech cities has been made after realizing the enthusiasm and the scope for developing startup ideas in Bengaluru."

He urged experts and entrepreneurs to bring out innovative ideas to address problems of urban high-tech cities and increase the ease of living in such cities.

Speaking about the startup park, Bommai said, "the multi-modal park will be a knowledge hub allowing entrepreneurs to reflect and develop startup ideas for the overall development of the state and nation".

“The natural resources around us are dwindling at an alarming rate every year. The development comes at the cost of nature and natural resources. Hence, I urge the scientific and technological community to come up with eco-friendly innovations, ideas and tech, so that we can preserve our resources for the future,” said Bommai.

The summit will witness at least 9 memorandums of understanding (MoUs) and the launch of over 20 products, marking the silver jubilee of the Tech Summit in Bengaluru.

Posted by editor-manu-sharma at 8:04 PM