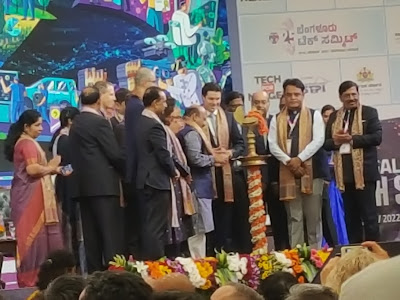 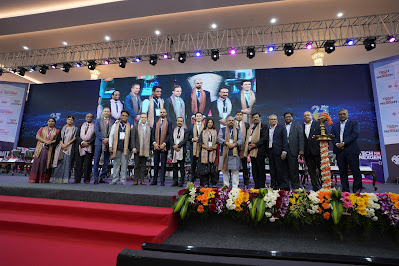 * With a mission to lead the country in technology and innovation, Karnataka's Chief Minister Shri Basavaraj S. Bommai highlights the state's potential and advancement in the IT, biotech, and start-up sectors at BTS 2022 inauguration ceremony

* First full-fledged on ground version of BTS post the pandemic

Prime Minister Shri. Narendra Modi today inaugurated the 25th edition of Bengaluru Tech Summit 2022, at a glittering ceremony in the presence of a galaxy of leaders from the IT, BT and start-up sectors.  The event was organized by The Department of Electronics, IT, Bt, S&T, Government of Karnataka along with Software Technology Parks of India (STPI), and is the first full-fledged on ground version of BTS post the pandemic. The central theme of BTS this year is 'Tech4NexGen' and will focus on Electronics, IT, Deep Tech, Biotech, and Startups.

In his inaugural address, Prime Minister Shri Narendra Modi praised IT professionals from Bengaluru for creating innovative technology products that helped the country navigate the tough times during the Covid-19 pandemic when all other countries were struggling. The Prime Minister gave the example of Ayushman Bharat, one of the world’s largest insurance programs that was implemented seamlessly because of the efforts of India’s technology professionals.

Speaking on the occasion, Shri Basavaraj S. Bommai, Chief Minister of Karnataka announced the setting up of six new cities in Karnataka to promote the growth of the knowledge and technology sectors in the state. These new cities will be developed in Kalaburagi, Hubballi-Dharwad, Mangaluru, Mysuru and Bengaluru. These cities will be well planned, high-tech and help promote IT, BT and startups. A dedicated Startup Park will be developed near the Bengaluru international airport which will be multi-modal and help promote various spheres of the startup eco-system, he said adding that the state needs to do much more for the growth of the startup industry. He had also announced that Knowledge and Technology City will be created near Bengaluru International Airport.

He further added that the government will begin work on developing these cities within the next six months. The chief minister, Shri. Bommai also called upon the leaders of the scientific world to innovate for the betterment of the human race and develop technologies to create a new healthy human being and better future for all.

Unique distinction of having first and 100th unicorns

Dr C.N. Ashwath Narayan said the government of Karnataka has been enabling the right kind of learning and education in a big way to promote the growth of the knowledge sectors. The state government has set a target of achieving $300 billion digital economy by 2025, the share of bio technology will be $36 billion. The minister lauded the startup industry in Karnataka for achieving distinction of the first and the 100th unicorns in the country.

The 25th edition of Bengaluru Tech Summit is today a testament of Karnataka's commitment to innovation and technology, supported by nimble policies and initiatives aimed at making the state the innovation hub of India. This journey began back in the year 1998, when Bangalore IT.biz was the country’s first ever IT focused event hosted by a city. It was inaugurated by the then Prime Minister of India Shri Atal Bihari Vajpayee. This was followed by the Bangalore Bio Summit in 2001, dedicated to the Biotechnology industry. Both these flagship events put the State of Karnataka on the Global map, projecting the State’s potential and contribution to the respective sectors. In the year 2017, both these flagship events were merged as Bengaluru Tech Summit.

The 3 day BTS2022 event will witness the coming together of global tech leaders, Indian corporates and startups from IT, Deep tech and Biotech, showcasing disruptive technologies, forging partnerships and alliances.

The 25th edition of Bengaluru Tech Summit will have participants from over 30+ Countries, 350+ Domain Experts in 70+ Sessions to be attended by 5000+ Delegates

Special events which include the IT Export Awards, Smart Bio Awards, Rural IT Quiz, Bio Quiz and Bio Posters

An annual highlight at the Summit is the Global Innovation Alliance (GIA), an initiative of Government of Karnataka's Department of Electronics, IT, Bt and S&T with the objective of curating relationships in innovation, science and technology with various countries. This initiative has enabled the collaboration and deep engagements with 30+ partner countries, 18 GIA Tech Engagement Meets, 1,500+ Start-ups being engaged in projects, and 10+ academic institutions engaged across different projects.

India’s IT hub, the State of Karnataka is on a mission to promote faster and more inclusive growth across the IT and biotech sectors via dynamic policies and related initiatives. Some of the milestones include the Information Technology Policy 2020-25, establishment of K-Tech Innovation Hubs, the country’s first ARTPARK (AI & Robotics Technology Park), the Bengaluru Helix Biotechnology Park, and establishment of Centres of Excellence (CoE) to name a few.

Today, BTS 2022 is an important forum for dialogue amongst industry, startups, researchers, and policymakers to forge collaborations and alliances. This will also include Multi-Track Conferences on IT & Electronics, Deep Tech, Start-Ups & Biotech.

Overview of the conferences scheduled under each track for DAY 1:

4 sessions which covered the themes of Lead the Techade, Convergence of technological revolution, Accelerating trust and responsibility, and Building India’s power in the emerging tech.

4 sessions which covered the themes of: We define tomorrow, Venture capital’s long-term growth, Building robotics ecosystem, and the Future of Digital Publics Good.

4 sessions which include the themes of Leading the new normal, Genomics revolution 2.0 and its implications, Smart Supply Chains in Biopharma and Gene Editing and Agriculture.

The sessions focused on data localization to digital upskilling, innovation gateway to the world, unleashing the 5G with Nokia and Australia – a great place for a tech business, investment, work and study.

Other highlights of the day include an expo and bio poster visit, followed by a Silver Jubilee function and felicitation of the top 35 companies from various sectors.

Posted by editor-manu-sharma at 7:05 PM