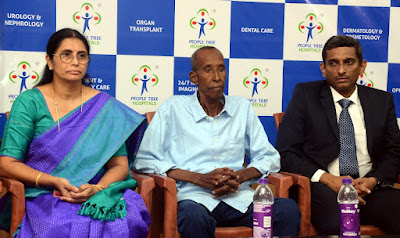 Patient arrived at People Tree Hospitals with severe mitral regurgitation across his valve as the existing valve had degenerated. He came in frank cardiac failure with breathlessness, fluid collection in chest, abdomen and legs with a  BP of 80/50mm of Hg.The patient had chronic kidney disease, chronic liver disease, Splenomegaly,  Thrombocytopenia and bleeding Duodenal Ulcer. Many centers refused to operate the patient due to these comorbidities.

The patient was examined at People Tree Hospitals Advanced Center for Heart Care and determined that minimally invasive transcatheter mitral valve replacement: a state-of-the-art procedure that is very rarely performed nationwide was the only possible option.

Minimally invasive transcatheter mitral valve replacement is an innovative procedure in which a catheter is inserted through the main lower limb vein.  From there, the catheter is advanced into the right atrium and the interatrial septum is punctured to access the left atrium. The mitral valve is located between the left atrium and the left ventricle. The catheter goes through the surgical valve and the new valve is threaded onto the catheter. It is inflated with a balloon so it expands into position and starts working.

Dr Jothi S Neeraja, MD, CEO, People Tree Hospitals said, "I am proud to say that we have the most dedicated and passionate cardiac care team committed to saving lives! The team is well trained to perform all the advanced procedures with the latest technology. We are committed to solving cardiac problems and spreading awareness." .

"Our patient is a 60-year-old man from Sudan who has undergone mitral valve replacement surgery twice, the last one 10 years ago. His biological valve had deteriorated so he was experiencing severe mitral regurgitation. Due to this, several symptoms appeared. He also had chronic kidney and liver disease with splenomegaly, low platelet count, and duodenal ulcer with fresh clots. He did not have the option of surgical mitral valve replacement as he had multiple comorbidities and a history of two mitral valve replacements. Surgeons at many centers refused to operate on him. So we decided to perform a novel transcatheter mitral valve replacement (TMVR). After a detailed evaluation, it was decided that he was suitable for TMVR. In this, a prosthetic valve was implanted in the mitral position through a lower venous access. A post-procedure echo showed a normally functioning valve without mitral regurgitation. The patient tolerated the procedure well. He has been on follow up and his kidney function has improved and he is symptom free now. This is one of the first few such procedures done in Karnataka," said cardiologist Dr Prasad B

Posted by editor-manu-sharma at 6:29 PM