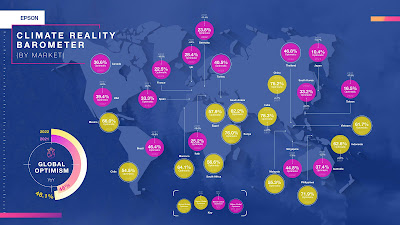 * Despite ever-increasing instances of climate impact, 78.3% of Indians are optimistic that we will avert a climate disaster in their lifetime. Up from 73.4% just a year ago

* India, worryingly, has the highest level of optimism when it comes to the climate crisis, as compared to any other country in the world

Epson, a world leader in digital imaging and printing solutions, published its first Climate Reality Barometer in 2021: a survey of people from a diverse set of countries, ages and backgrounds to gauge understanding of, and attitudes towards, climate change.

Epson today released the findings of its second Climate Reality Barometer - 2022, a survey of 26,205 people across 28 countries, including India. Across the world, people are stepping up personal efforts to avert climate change, according to the latest findings. ?Research from the global technology leader suggests that while the world economy proves to be a distraction from efforts to address climate challenges, climate change remains a primary concern for many.

The survey presents fascinating insights into how attitudes are (and are not) changing as the climate crisis unfolds. Findings show that awareness is growing – but slowly and inconsistently. While the ‘climate reality deficit’ identified in the first Barometer stubbornly persists – the data also suggests that it is narrowing, and that people are doing more to tackle the crisis.

In India however, the outlook remains extremely concerning.  In recent months, India has experienced record-breaking heatwaves, which have been made 100 times more likely by the climate crisis, according to experts (source).

Despite this, over three-fourths (78.3%) of people contacted in India are optimistic that we will avert a climate disaster in their lifetime. Respondents in other countries are far less optimistic with the opposite end of the spectrum being in France (22.5%) and Japan (10.4%)

On the other hand, 10.8% were pessimistic in India that we will avert a climate disaster in their lifetime. In France, a whopping 53.5% and in Japan 67.4% were unconvinced in contrast

In India younger respondents aged 25-34 (82.4%) were more optimistic than those aged 45-54 (68.1%) pointing to a possible and concerning lack of awareness among younger audiences

Promisingly though, individuals across the world are already acting on certain things to mitigate the climate emergency.

In India, the top three actions people report that they are already doing, include:

For those who have taken up actions to mitigate the impacts of climate change, there are some gaps in terms of how people have consistently committed to these actions. For example, just (20.8%) have tried reducing plastic use for longer than a year and continue to do so. The efforts to build awareness and inspire change need to be ongoing and consistent.

The individual lifestyle changes however suggest some focus on the climate emergency. In India, the key drivers for change include:

Growing optimism in India and across the globe appears to contradict climate reality. In 2022, the Intergovernmental Panel on Climate Change (IPCC) announced that “Human-induced climate change is causing dangerous and widespread disruption in nature and affecting the lives of billions of people around the world.”?

Yasunori Ogawa, global president of Epson, says: “Epson’s corporate purpose is focused on improving lives and the planet, and we will devote significant resources to achieve this. As the world gathers for COP27, our Climate Reality Barometer aims to raise awareness and empower transformational change.  We hope that the Barometer’s insights will help governments, industries, and individuals to step up their efforts to avert climate disaster. While we know there is a long way to go, we believe we can build a better future if we work together and act now.”??

The 2022 Epson Climate Reality Barometer paints a not-so-rosy picture. It also indicates that short-term economic demands are in danger of distracting governments, businesses, and individuals from imperative environmental action. The world needs to keep its focus and ensure decisive, rapid, and effective responses to the ongoing climate emergency.

While individual actions are ramping up, it’s clear that much more needs to be done. Governments need to regulate for sustainability, businesses need to develop sustainable policies and technologies, and individuals need to accelerate lifestyle changes – if the world is to meet its climate change targets and avoid irreversible change.

Working together, Epson believes that we can all build a better future.

Epson is a global technology leader whose philosophy of efficient, compact and precise innovation enriches lives and helps create a better world. The company is focused on solving societal issues through innovations in home and office printing, commercial and industrial printing, manufacturing, visual and lifestyle. Epson will become carbon negative and eliminate the use of exhaustible underground resources such as oil and metal by 2050.

Epson India Pvt. Ltd. was incorporated in the year 2000. Epson products address the needs of homes, businesses and commercial enterprises as also those of consumers with specialized needs in India. With a commitment to providing products and services that surpass people’s expectations, Epson India today has an enviable reputation for quality and value. Headquartered in Bangalore, the company markets and supports Epson Inkjet Printers, Inkjet All-in-Ones, Point of Sale Printers, 3LCD Projectors, Scanners, Large Format Printers, Textile Printers, Robots and Dot-Matrix Printers. In all of these categories, Epson is either the No. 1 or No. 2 brand in India and growing fast. https://www.epson.co.in/

Posted by editor-manu-sharma at 3:16 PM