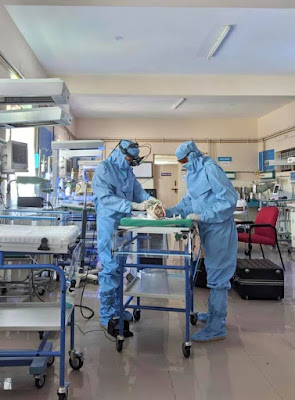 SAP and CleaVision have today announced an innovative new program aimed at reducing the risk of preventable blindness as a result of Retinopathy of Prematurity (ROP) in pre-term babies. Using the power of machine learning and data analytics, the CleaVision solution helps time-pressed doctors to arrive at a more accurate diagnosis while focusing on what’s most important – treating at risk babies. Developed in India, the program is being piloted at Narayana Nethralaya Eye Institute in Bengaluru. It’s estimated that the screening program can be scaled up to further outreach and low-resource settings, minimizing time to diagnosis and maximizing the potential for treatment.

One-fifth of the world’s 15 million pre-term babies are born in India. It is estimated that, of the 3.5 million live births annually, over 200,000 infants are likely to suffer from the advanced stage of ROP, where abnormal growth of blood vessels inside the baby’s eyes can cause bleeding, scarring, and retinal detachment. Failure of timely intervention and treatment can lead to irreversible blindness.

“Early diagnosis is essential as most babies will recover completely if they get timely treatment for ROP,” said Chirag Gupta and Narayan V K, co-founders of CleaVision. “With India having the highest number of pre-mature pregnancies and the fact that there are relatively few qualified ROP practitioners, the more we can digitize and automate pre-screening, the more time those practitioners can spend on actual treatment.”

The CleaVision solution integrates image data processing with SAP Business Technology Platform, SAP AI Platform, and SAP Analytics Cloud to automate the identification of retina and blood vessel features and to make a recommendation on plus disease – a severe manifestation of ROP in premature babies. The screening data is then served to hospitals and can be reviewed by qualified medical professionals in the KIDROP (Karnataka Internet Assisted Diagnosis of ROP) telemedicine network.

“The diagnosis of plus disease is germane to ROP treatment decisions,” said Dr Anand Vinekar, Head, Pediatric Retina Department at Narayana Nethralaya Eye Institute. “The CleaVision deep learning automatic ROP Plus disease detection app has shown the ability to differentiate between plus and no plus disease, which is very likely to aid technicians and ROP specialists in arriving at a more accurate triaging diagnosis. That, in turn would help treat these babies on time, giving a better outcome which prevents blindness from ROP. We are piloting the software through the KIDROP program, which performs up to 2,500 imaging sessions each month from 135 neonatal units across Karnataka.”