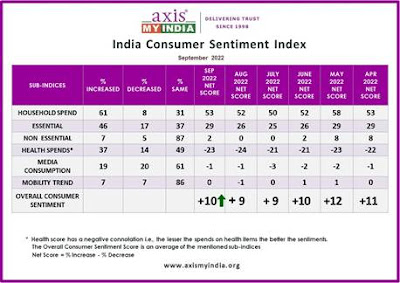 * 20% to shop more this festive season than last year

Axis My India, a leading consumer data intelligence company, released its latest findings of the India Consumer Sentiment Index (CSI), a monthly analysis of consumer perception on a wide range of issues. The September report reveals that sentiments have improved across key sub-indices like essential and discretionary products and increased mobility. However, sentiment remain the same as last month for media consumption and overall household expenses. This month’s survey also highlights that 48% of consumers tend to shop more during the festive season as compared to rest of the year & 20% of the consumers plan to shop more this festive season as compared to last year.

The September net CSI score, calculated by percentage increase minus percentage decrease in sentiment, is at +10, from +9 last month reflecting an increase/decrease by 1 point

The survey was carried out via Computer-Aided Telephonic Interviews with a sample size of 10014 people across 32 states and UTs. 68% belonged to rural India, while 32% belonged to urban counterparts. In terms of regional spread, 23% belong to the Northern parts while 24% belong to the Eastern parts of India. Moreover 29% and 23% belonged to Western and Southern parts of India respectively. 59% of the respondents were male, while 41% were female. In terms of the two majority sample groups, 32% reflect the age group of 36YO to 50YO, while 31% reflect the age group of 26YO to 35YO.

Commenting on the CSI report, Pradeep Gupta, Chairman & MD, Axis My India, said “After compromising past two festive seasons to the pandemic and its related constraints, this year consumers are expected to shop more during festivities. One can witness slight increase in expenses across essential and discretionary products already. Further improvement in mobility sentiments highlights the fact that more and more people are enjoying the stores and malls experience of discovering, shopping and gifting. This sentiment is also extended among the Indian farmers, wherein a significant percentage of 15% intends to buy a brand new tractor in the next one year. This is thus a crucial time for the Indian advertising business as spend are expected to bring a lot more returns than usual. As more and more people (61%) are watching online video content (YouTube/OTT) on their mobile/home TV and thereby noticing ads across TV, online and social media platforms, it is of utmost importance for the media industry to tap the right medium for addressing differentiated consumer needs.

·        Overall household spending has increased for 61% of families which is the same as last month. The net score which was +52 last month has increased by +1 to +53 this month

·        Spends on essentials like personal care & household items has increased for 46% of the families which is an increase by 1% from last month. The net score which was at +26 this month has increased by +3 to +29

·        Spends on non-essential & discretionary products like AC, Car, and Refrigerator has increased for 7% of families which reflects an increase by 1% from last month. The net score which was at 0 last month has improved to +2 this month. This could reflect the spirit of festive season approaching.

·        Consumption of health-related items has increased for 37% of the families, which reflects a decrease by 1% from last month. The health score which has a negative connotation i.e., the lesser the spends on health items the better the sentiments, has a net score value of -23, as compared to -24 last month.

·        Mobility has increased for 7% of the families, reflecting an increase of 1% from last month.

·        According to Axis My India Consumer Sentiment Index Survey, 48% of consumers shop/purchase more products during the festive season as compared to rest of the year

·        Digging deeper into the festive spirit, the survey shows that 20% plan to shop more this festive season compared to last year. However 32% plan to shop the same as last year

·        Exploring farmer’s sentiments towards new tractors, the survey found out that 10% are planning to purchase new tractors in the coming year, while 3% and 2% plan to but within 6 months and 3 months respectively. Also, a significant 86% of farmers don’t own a tractor, because of reasons like smaller land size, renting or affordability.

·        In an attempt to understand consumer’s engagements with mobile apps, the survey discovered that on an average consumers have 9 apps on their smartphones. 16% use minimum of 4-8 apps, through their smartphone and 22% have more than 8 apps. A significant 24% mentioned that they use a feature phone.

·        The survey further revealed that a majority of 61% watch online video content like YouTube/OTT on their mobile/home TV.

·        In order to understand in which medium advertisements get noticed more, the survey found out that a majority of 32% notice advertisements on TV, while 26% notice it through online mediums. It also discovered that only 17% notice ads on social media platforms, 15% on Print, 6% on Outdoors and 2% on Radio.

Posted by editor-manu-sharma at 1:49 PM