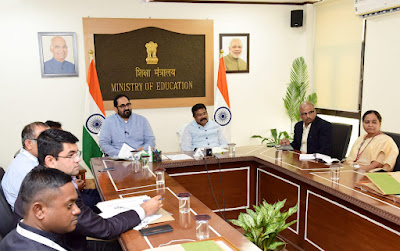 The 2nd edition of ‘Awards for Excellence in District Skill Development Planning’ (DSDP) were organised today with great fervour and fanfare at Dr. Ambedkar International Centre in New Delhi where top 30 districts were awarded for their innovative best practices in skill development in the region. Rajkot in Gujarat, Cachar in Assam and Satara in Maharashtra respectively were ranked top three among all participating districts.

District Collectors, District Magistrates and other representatives from across 30 States attended the award ceremony and shared their ideas & experiences and presented the skill development work done at the grassroot level in their districts. Thirty districts were selected, and awards were given under the following three categories:

Category I: 8 Awards for Excellence in District Skill Development Planning

Later in an interactive session, the officials met the Hon’ble Minister of Education and Skill Development and Entrepreneurship, Shri Dharmendra Pradhan, and Hon’ble Minister of State (MoS) for Skill Development and Entrepreneurship, and Electronics and IT Shri Rajeev Chandrasekhar and shared best practices and work done in their region.

Shri Dharmendra Pradhan asked the District Collectors, District Magistrates and other officials to carry out demand-mapping of the skilled workforce and drive awareness about skill development initiatives at the local level. He said that skilling is a lifelong process and the DCs should further the entire continuum of skill development and work towards strengthening the skill development ecosystem through innovative planning at the district level.

In light of recent disruptions brought by technology, districts were advised to adopt a bottom-up approach towards skill development, from both the Ministers.

Guided by the Prime Minister’s vision of macro-planning for micro-implementation, DSDP Awards act as a guide for DSCs in integrating district plans with state- and national-level skill development planning.

Congratulating all participants, Shri Dharmendra Pradhan, Minister of Education and Skill Development and Entrepreneurship, said all planning for skill development should have a link to the local economy, and that the way to an Aatmanirbhar Bharat is through the building of Atmanirbhar districts. Shri Rajeev Chandrasekhar, Minister of State (MoS) for Skill Development and Entrepreneurship, and Electronics and IT, said the awards were reflective of the Centre’s intention to build an ancillary skill ecosystem where multi-skilling opportunities gave rise to ‘village engineers’ and increased livelihood chances. The science and method behind skill planning should aim to catalyse the local economy by creating multiple avenues of skilling and multiple job roles, he said.

Lauding the work done by the districts, Shri Rajesh Aggarwal, Secretary, Ministry of Skill Development & Entrepreneurship, said, “Riding on its unique demographic dividend, India is on the path to fulfil Hon'ble Prime Minister Shri Narendra Modi's vision of becoming the Skill Capital of the World. Many countries with ageing populations are banking on India for skilled workers, and global companies are keen on starting businesses in India. There is an urgent need to skill, reskill and upskill the country's youth and districts can play a pivotal role in fulfilling this mission. I encourage all district magistrates to keep an eye on the global scenario and align their skill development programmes accordingly.

In order to build a high value addition economy, districts should ensure that trained youngsters also get hands-on experience in the process. I congratulate all winners of DSDP Awards and laud their excellent effort in creating functional and innovative plans. I am certain with optimal utilization of district-level resources and institutions, we will swiftly more towards fulfilling the vision of creating a Skill India," he added.

Among winning districts, the Rajkot DSC has implemented several projects to augment skill development in the district. With a strong focus on skilling Persons with Disability (PwD), the district has supported people with learning disabilities and dyslexia.

Short shelf life and high transportation cost were posing a supply chain challenge to pineapple farmers of Assam’s Cachar district, forcing them to dispose of large quantities of the fruit and sell them at sub-par market prices. By setting up a processing unit for manufacturing pineapple products locally, the Cachar DSC came up with a quick solution to address the problem. This gave farmers the flex and the bargaining capacity to sell pineapples at a handsome profit once more.

At Satara in Maharashtra, the DSC implemented various programmes to strengthen skilling, and training a workforce for disaster management. The district has also owned the responsibility of empowering women affected during COVID with skill training.

DSDP Awards were instituted under the Skill Acquisition and Knowledge Awareness for Livelihood Promotion (SANKALP) Scheme by MSDE in June 2018 to promote decentralised planning, acknowledge and reward the extraordinary and innovative work done by districts in the field of skill development. The first DSDP Awards were held in 2018-19, with 228 districts from 19 states participating in the initiative. Districts with plans of fostering innovation and enabling local livelihoods with skill development initiatives were shortlisted for the awards.

MSDE envisages these awards will encourage all District Skill Committees (DSCs) and will promote better understanding around DSDP by using capabilities for implementing targeted projects at the district level. The project aims to maximise the impact of SANKALP’s primary initiative, which is to strengthen institutional mechanisms for skill development at the state and district levels. IIT Delhi and IIT Kharagpur were chosen as evaluation partners to assess the award entries.

Skill Acquisition and Knowledge Awareness for Livelihood Promotion ("SANKALP") is a programme under Ministry of Skill Development & Entrepreneurship with loan assistance from the World Bank. It aims to improve short-term skill training qualitatively and quantitatively through strengthening institutions, bringing in better market connectivity and inclusion of marginalised sections of the society. Know more about SANKALP at www.sankalp.msde.gov.in

Posted by editor-manu-sharma at 12:28 PM