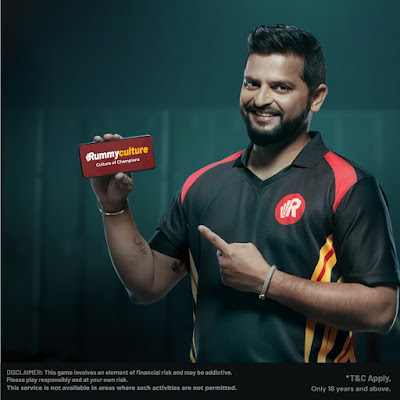 RummyCulture, one of the country’s leading online rummy platforms, has launched the next phase of its ‘Culture of Champions’ campaign, featuring former Indian international cricketer Mr Suresh Raina. RummyCulture—a Gameskraft application—has been providing users with enjoyable skill-based gaming experiences with an emphasis on safety, security, and technology. With the campaign, the company is looking to bring the game to newer generations of players.

Mr Suresh Raina will strengthen the brand’s vision of changing people’s perception of rummy, reaffirming it as a game of skill, like any other sport, that requires mental acumen, concentration and game tactics. A proven champion who knows what it takes to win, Suresh Raina highlights a winning mentality that is at the heart of the campaign.

The campaign sees a TVC being launched during the current IPL campaign on TV, Hotstar, and other digital channels.

Amit Kushwaha, Head - Brand Strategy, Gameskraft, said, “Our latest campaign continues our efforts to introduce rummy to a larger audience and build positive stories around the game. Changing people’s preconceptions through our storytelling, focusing on aspects of skill, concentration, and strategy has always been a priority. And there’s no one better than Suresh Raina to deliver our message and invite people to enjoy online rummy in a safe and secure environment.”

Speaking on his association, Suresh Raina said, “Being successful at rummy requires the same mental skill, concentration, and looking at competitor strategy as judging a difficult situation on the cricket field. RummyCulture’s appeal lies in its focus on becoming the most trusted platform for rummy players and how it brings together players in a fun, easy-to-play environment while constantly testing their skills with real players. I’m glad to champion this ‘culture of champions’ campaign and look forward to the rise of this pure Indian game.”