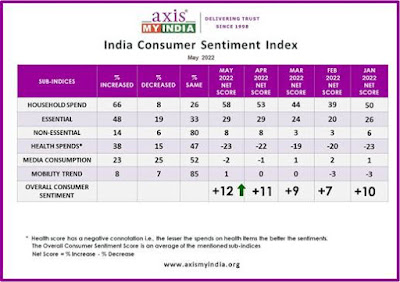 ·         54% report advertisement claims on TV and in newspapers are farfetched

Axis My India, a leading consumer data intelligence company, released its latest findings of the India Consumer Sentiment Index (CSI), a monthly analysis of consumer perception on a wide range of issues. The May Report reveals a consistent improvement in consumption across overall household products, essential products and discretionary products. The survey discloses a minimal increase in the consumption of media and health- related products and a marginal improvement in sentiments associated with mobility. Upon reflecting on the consumers’ online shopping behaviour, the survey revealed that 35% shopped online last year. 19% further stated that quick gratification schemes by Indian food and groceries online apps are convenient and saves time though 77% have not tried it yet.

The May net CSI score, calculated by percentage increase minus percentage decrease in sentiment, was up to +12, from +11 last month and continuing the upwards trends noticed in the last 4 months.

The survey was carried out via Computer-Aided Telephonic Interviews with a sample size of 10166 people across 30+ states and UTs. 69% belonged to Rural India, while 31% belonged to urban counterparts. In addition, 68% of the respondents were male, while 32% were female. In terms of regional spread, 26% each belonged to Northern and Eastern parts of India, while 31% and 17% belonged to Western and Southern parts of India. In terms of the two majority sample groups, 31% reflect the age group of 26YO to 35YO, while 30% reflect the age group of 36YO to 50YO

Commenting on the CSI report, Pradeep Gupta, Chairman & MD, Axis My India, said, “The evolved and re-energised consumer community reflects optimism towards increasing expenditure in discretionary spends showcasing their affinity to ‘what they want rather than what they need’. This provides a ray light for brand and marketers to tap towards the shifting priorities of consumers. While brands are striving to capture the instant gratification instincts of consumers there is a need to understand context and content to capture the right eyeballs.  On a holistic level, it is necessary to shake the long-drawn perception of consumers being a homogenous community as every individual has distinct aspirations, seeks different investment plans, and consume varied news. The news industry has grown in the last year or two with the Pandemic, the Russia -Ukraine war or the Sri-Lankan economy crisis but elections & political news remain the most watched content by viewers. Interestingly even with better opportunities abroad 64% Indians would prefer to stay in India and work towards a better living, something we all should be proud of!”

·          Overall household spending has increased for 66% of families which reflects a 4% increase from the last month. The net score which was at +53 last month has increased by +5 to +58 this month.

·          Spending on essentials like personal care & household items has increased for 48% of the families and remains the same as compared to last month. Spends however remain the same for 33% of the families. The net score which was +29 last month has remained the same this month.

·          Spends on non-essential & discretionary products like AC, Car, Refrigerator has increased for 14% of families reflecting an increase of 1% from last month. Spending nevertheless remains the same for 80% of the families reduced by -2. The net score has remained the same at +8 compared to previous month.

·          Consumption of health-related items has increased for 38% of families. Consumption more or less remains the same for 47% of the families, while decreased consumption is witnessed among 15%. The health score which has a negative connotation i.e., the lesser the spends on health items the better the sentiments, has a net score value of -23 this month.

·          Consumption of media has increased for 23% of the families reflecting an increase by 1% from last month. Consumption remains the same for a majority of 52% of families. The overall, net score which was at -1 in the last month is at -2 this month.

·          85% of families said that they are going out the same for short vacations, malls and restaurants. Increased travel is reflected only among 8% of families, an increase by +2 from last month. The overall mobility net score is at 1.

·        Axis My India further evaluated consumers’ views on advertisement on television and on newspapers. The survey discovered that 54% reason that advertising claims made on these platforms are unbelievable. However, 22% believe otherwise.

·        In an attempt to understand brand visibility and exposure during IPLs, the survey discovered that in the current season 9% of the total respondents have noticed ads by Dream 11 - Indian fantasy sports platform that allows users to play fantasy cricket and 6% have noticed ads by Tata Neu from Tata Digital. Among those who have watched IPL this season, Dream 11 is recalled by 41% & Tata Neu by 30%. At an overall level, 22% have watched IPL & 78% mentioned they have not watched IPL this season.

·        Demystifying consumers’ online behaviour, Axis My India’s survey found out that 35% indulged in online shopping in the last one year. In addition, the survey revealed that 19% views quick gratification schemes by Indian food and groceries apps (such as 10 minutes delivery Zomato, Big-basket / Licious / Dunzo–same day delivery) positively believing it to be ‘convenient and time effective’ but a sizable 77% have not tried it yet.

·        The survey further dug deeper to unravel viewer’s content behaviour. As per the survey a majority of 36% said that they prefer watching news related to elections and political parties while 22% is interested in news related to Russia-Ukraine War. In addition, two secondary preferences involve information related to sports (20%) and entertainment (16%). A majority of 52% further said that they have watched enough of Russia-Ukraine war related news.

·        Finally, the CSI survey revealed that 33% would prefer to migrate in another country in search for better opportunity and lifestyle where as a sizable 64% would prefer to stay in India.

* Health score has a negative connotation i.e., the lesser the spends on health items the better the sentiments.

Axis My India is India’s foremost consumer data intelligence consultancy that has revolutionized the field of election polling in the country, with an accuracy rate of ~93% spread across 28 states and 8 union territories and 2 national elections. The company has a presence in over 737 districts and has touched 85 million Indian households. It counts some of India’s largest corporations, state governments as well as Union Government in its clientele and offers a repertoire of research related services, including consumer insights, product validation, market segmentation, on-ground brand activation, personalized media solutions and micro marketing. The company publishes an annual Consumer Trust Index – spread across 45 consumer and product categories, and 1 million respondents.