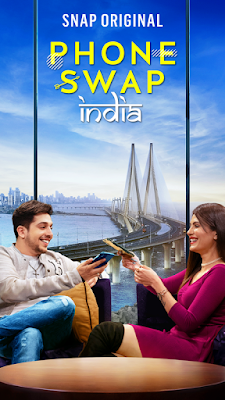 Snap Inc. today announced the launch of “Phone Swap India,” its first Snap Original series in India premiering Saturday, 27 March. “Phone Swap” is one of the most popular and long-standing Snap Originals, now in its 12th season and reaching over 69 million unique viewers on Snapchat in the U.S. Produced and filmed in the heart of Mumbai by Colosceum Media, this new series was created in partnership with Team Whistle. Each episode follows two people on a blind date, who are unexpectedly forced to trade phones and then afterwards decide if they want to go on a second date. The 12-episode series is in Hinglish and has English and Hindi subtitles, available only on Snapchat’s Discover.

Snap Originals are Shows made exclusively for Snapchat by some of the world's greatest storytellers and made for the unique behaviours of mobile. Like all Shows on Snapchat, they are vertical, full screen and created to reflect and celebrate the diverse voices, experiences and passions of the global community of Snapchatters. Last year, more than 70 million people in India watched Shows on Snapchat, and Snap’s daily active user base grew by over 150%.

“Phone Swap India” marks the first launch from a slate of new original content Snap announced in October 2020, including an upcoming Snap Original with rapper and lyricist Raftaar, and exclusive Creator Shows with the likes of Anushka Sen, Ruhi Singh and Vir Das.

“We have always believed in the importance of investing in a local content experience, working closely with local production partners, and are thrilled to launch Phone Swap India,” said Vanessa Guthrie, Head of Snap Originals. “This is our first Snap Original made for our Indian community and we have so much more in store - we can't wait for Snapchatters to tune in.”

Posted by editor-manu-sharma at 5:15 PM