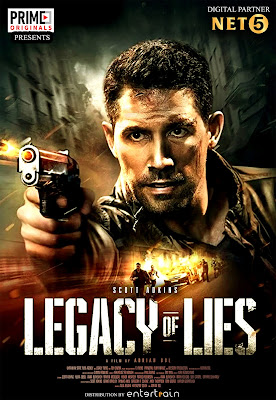 Prime Original's Pvt Ltd,  a Bangalore based company which also owns a OTT platform NET5, enters into film distribution by having their first movie “Legacy of Lies“ starring Scot Adkins on April 2nd across India in the languages of English, Hindi, Tamil & Telugu.

Prime Original's is one such company though they have their own OTT platform NET5, Company prefer to release some of their action, blockbuster movies first in theatres then they want to show it on their platform.

Prime Original's are releasing their Movie “ Legacy of Lies” on April 2nd 2021.across India in English, Hindi, Telugu & Tamil

ABOUT LEGACY OF LIES :

Martin Baxter,an ex-MI6 agent is thrown back into the world of espionage and high stakes when Sasha Stepanenko, a beautiful Ukrainian journalist, seeks his help uncovering the shocking truth about operations conducted by the Russian Secret Service.

Ten years ago, a fatal misjudgement made MARTIN BAXTER resign MI6. Now he’s on his last legs, bouncing cheap night clubs and moving around Europe with his 12-year-old daughter LISA.

One night, Martin is approached by SASHA STEPANENKO, a young Ukrainian journalist who is determined to find the secret files that were at the heart of Martin's failure as a secret agent.  Martin refuses to help her, afraid to be thrown back into the world of espionage and high stakes.

But then, as Martin exits his house, two men in familiar black suits are waiting for him. When he comes to, he sees TATYANA, an agent of the Russian Secret Service and his daughter Lisa. Tatyana gives Martin an ultimatum: or he will bring her the files and Sasha, or his daughter will disappear. The ex-MI6 agent has 24 hours to complete his mission…

Prime Originals Pvt. Ltd. is a company owned and operated by Bengaluru based businessman with interest in various business verticals. The group is a diversified and a large group in Bengaluru.

Posted by editor-manu-sharma at 12:56 PM