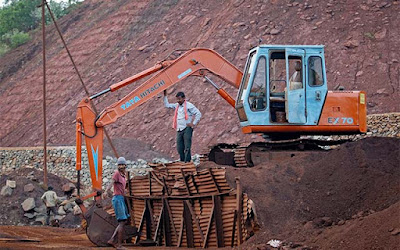 * Large quantities of iron ore from Eastern regions of India are imported in Karnataka severely affecting demand of iron ore mined in the state.

* Close to 19 lakh Metric Tonnes of Iron-ore is imported in Karnataka in the last five months from other states leading to the huge revenue loss and hampering employment opportunities in the state.

* Interstate Transportation of Iron Ore for Such a long distance is extremely environmentally unfriendly and carbon Negative.

The Federation of Indian Mineral Industries (FIMI), Southern Region seeks intervention of Karnataka Government and Ministry of Mines, over large quantities of iron ore brought into the state of Karnataka despite there are huge stocks of Iron Ore in the state. FIMI has raised serious concerns about the impact on employment, revenue, and infrastructure Development in the state because of rising imports of iron-ore while there is abundant supply & stocks of mineral in Karnataka. The concurrent restrictions on trade of iron ore in Karnataka is suppressing the growth of the sector and have significant deleterious effects on the industry and also the state exchequer.

In the state, around 4 lakh Metric Tonnes of iron ore had been imported in October 2020 from Eastern part of India through South-East Railway, which is almost 1620 kms. FIMI had highlighted the issue and raised the concern with The Principal Secretary to Govt. of Mines & SSI in Nov.2020. In the past 4 months since FIMI has raised concern to the state government, almost 15 lakh Metric Tonnes of iron ore has been imported to Karnataka. Transportation of Iron Ore across 1620 kms is completely Carbon negative and environmentally unfriendly.

The restrictions on trade of iron ore in Karnataka is suppressing the growth of the sector and have significant deleterious effects on the industry and also the public Exchequer. The rest of India is exporting iron ore as per the EXIM policy of Government of India thereby ensuring fair revenue to the State Exchequer including foreign exchange as well as overall growth of the nation by using the railways, port facilities etc. As per the data available, the total export in the year 2019 from other parts of India shows export of 10.34 Million Metric Tonnes of fines and 1.16 Million Metric Tonnes of lumps.

These restrictions are also distorting the market as the buyer has the freedom of trade, i.e. right to purchase iron ore from either the e-auction or from other States or even to import from overseas. This has created a skewed market, disadvantageous to sellers as they can only sell to domestic end-users.

Earlier, FIMI Southern Region had written to Ministry of Mines appealing to take appropriate facts and urgently submit necessary specifics before the Supreme Court, in order to rectify the gross imbalance that has arisen due to the prohibition on exports and seek urgent rectification of the situation by permitting export of iron-ore from Karnataka.

The Federation of Indian Mineral Industries (FIMI) is an all-India apex body established in 1966, to promote the interests of mining (including coal), exploration, mineral processing, metal making and other mineral-based industries. The body works towards promoting ‘Mine in India’ for ‘Make in India’, commitment to socio-economic growth and improving lives in remote mining regions, leading the sustainable mining movement in India, transforming geologic possibilities into mines of wealth and honing India’s mining skills.

Posted by editor-manu-sharma at 12:33 PM