India Tour of Australia Goes Live on SonyLIV; Scam 1992 Travels South Along with the Host of Other Shows 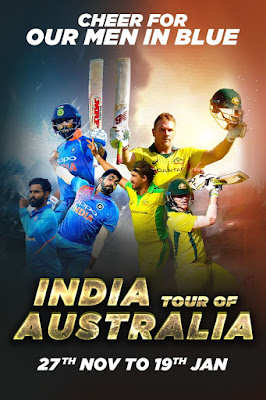 After months of waiting to see team India in action, SonyLIV is here with a breather for all cricket lovers. The much-hyped India Tour of Australia will go live on the platform starting 27th November. In one of the most high-octane series in International cricket, Team Kohli will take on the Aussies for three ODI’s, three T20’s and 4 test matches at their home turf till 15th January 2021. With simultaneous feeds across 4 languages, the much-anticipated tour will be available for viewing to SonyLIV’s premium subscribers.

Post a successful period of quarantine, the teams are now set to lock horns, this Friday onwards across venues in Brisbane, Adelaide, Sydney, and Melbourne. Team India will begin with a slight edge over the hosts in the ODI’s, with a 12-10 win-loss record against them in recent past. However, Australia, who recently defeated world champions England in their home turf, will look to replicate victory, led by Aaron Finch. Premium subscribers will get an access to the live feed without any delay.

There’s a lot to rejoice for soccer fans as well on SonyLIV with the popular UEFA Champions League 2020-21, the 66th season of Europe's premier club football tournament along with UEFA Europa League and Serie A matches going live on the platform. 2021 brings another sporting spectacle - Australian Open with Rafael Nadal headlining the event next year in Melbourne.

And there’s more in store for SonyLIV’s patrons. Following its stupendous success amongst audience and critics,  Scam 1992 – The Harshad Mehta Story will now be available for the regional audience with its dubbed versions in Tamil, Telugu, Malayalam and Kannada along with the host of other titles like Avrodh: The Siege Within, Your Honor, Undekhi and more. This development is in alignment with SonyLIV’s brand promise of curating an expansive content catalogue across languages and emerge as a go to destination for digital content.

In addition to this, the platform has recently launched titles like Uncommonsense by Saloni, Daan Sthapana hosted by the reputed speaker Devdutt Pattnaik and Mahabharat- Ant ya Aarambh, an 11-episode animation series.  Highly acclaimed English shows like The Good Doctor S4 and For Life S2 are also up for viewing for the Indian audience.

So, whether you are a cricket lover or a football enthusiast, an ardent fan of stand-up comedy or a devout believer in mythology, SonyLIV is the place to be.

SonyLIV is the first Indian premium Video on demand (VOD) service by Sony Pictures Networks’ (SPN) providing multi-screen engagement for users on all devices. Launched in January 2013, the digital streaming player is home to 24 years of rich content from the library of Sony Pictures Networks India (SPN) with over 40,000 hours of programming. SonyLIV subscribers get exclusive access to key sporting events from across the globe, the latest Hollywood Shows, Originals, 18,000+ hours of TV Shows, LiveTV, News, Lifestyle, Fitness and Kids content.

With 100 million+ app downloads so far, SonyLIV is the first amongst its competition to provide original and exclusive premium content to Indian viewers. SonyLIV is the first OTT platform to launch an Original web series - #Lovebytes, followed by India’s first Marathi Original – YOLO. Currently, the platform has over 150+ original shows spread across Hindi, Marathi, Gujarati and Bengali. The Tamil and Telugu library itself boasts of 2000+ hours of Movies and Originals. SonyLIV recently added new originals to its line-up - Avrodh, Your Honor, Undekhi and Scam 1992 being some of them.

SonyLIV has partnerships with key International studios – SPE Films, Lionsgate and iTV, which allows its subscribers exclusive access to award-winning shows like, Seinfeld, Power, The Good Doctor and Mr. Mercedes. The platform recently added a host of celebrated Hollywood shows to its library like LA’s Finest S2, On Becoming a God in Central Florida, Alex Rider, For Life, Lincoln Rhyme, War of the Worlds, Commons and Indebted amongst others.  SonyLIV also has exclusive local partnerships with the likes of TVF, which adds popular Indian Originals like Gullak and Tripling S2 to their vast content library.

Posted by editor-manu-sharma at 6:35 PM