Hiring Recovers by 18% to Climb 30% Year-On-Year in September: LinkedIn 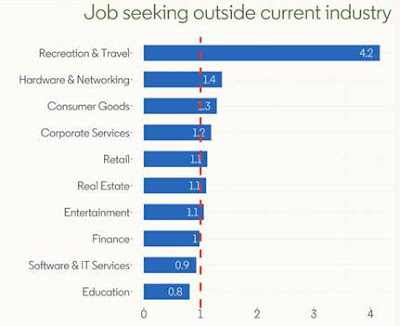 LinkedIn, the world’s largest online professional network, today announced findings for the September edition of the ‘Labour Market Update’, a monthly update on hiring trends and insights based on LinkedIn's Economic Graph, a digital representation of the Indian economy built by conducting a close analysis of actions of 71+ million members in India. Findings from the latest edition show that hiring continues to improve, competition for jobs is easing, and the digital divide is narrowing, suggesting a recovery in hiring for the non-tech sectors.

Earlier in the year, hiring declines reached a low of below -50% year-on-year in April, before starting to slowly recover. In late July, it crossed the 0% mark and continued increasing, reaching 12% in August and 30% year-on-year at the end of September. Hiring in September witnessed an 18 percentage points climb as compared to August 2020.

As businesses and companies continue reopening, we expect recovery to continue as well.

Competition for jobs remains the same as August 2020, at 30% higher as compared to last year. However, after nearly doubling in the middle of 2020, the applications per job dropped down 1.3x in August and stayed at a similar level in September.

Job seekers continue seeking opportunities in other industries, but under less pressure compared to June 2020

Compared to pre-COVID, we still see that job seekers who are currently in the badly affected sectors (such as Recreation & Travel) are 4.2 times more likely to look for jobs in a different sector, compared to pre-COVID. But this stress has abated from June 2020, where the likelihood was as high as 6.8 times. Similarly, the stress for the Retail sector has reduced from 2.4 times to 1.1 times. There is not much change in the other sectors.

Earlier this year during the height of COVID-19 lockdowns, those without digital skills were more affected by the hiring dips compared to those with disruptive digital skills (such as AI and Robotics). Recovery was also faster for disruptive digital talent, but in recent months, this gap has started to narrow from over 20 percentage points difference in April and May, to 2 percentage points difference in September. This possibly reflects the recovery of non-tech sectors.

LinkedIn's Economic Graph is a digital representation of the global economy, and insights from the graph provide real-time information on trends that are emerging in the labour market built by conducting a close analysis of actions of LinkedIn’s 69+ million members in India. This is the second India Labour Market edition, and the report highlights the hiring trends and insights from July.

LinkedIn connects the world’s professionals to make them more productive and successful and transforms the way companies hire, market and sell. Our vision is to create economic opportunity for every member of the global workforce through the ongoing development of the world’s first Economic Graph. LinkedIn has more than 722 million members and has offices around the globe.

Posted by editor-manu-sharma at 12:29 PM