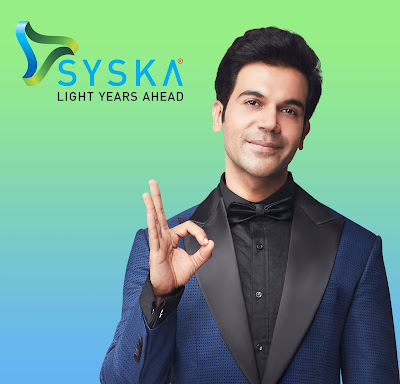 SYSKA Group, India’s leading Fast Moving Electrical Goods (FMEG) company, today announced that it has roped in award winning Bollywood actor Rajkummar Rao as the new face of the brand. Rajkummar Rao will work closely with the company to promote the Syska products across LED and Fan segments. Rajkummar Rao enjoys mass appeal for his unconventional choice of movies and is one of the most versatile actors of today. He has a strong connect with urban audiences, as well as with those from Tier 2 and 3 markets, which make up the large segment of Syska’s target groups.

After the untimely and unfortunate demise of Syska’s first ever brand ambassador Irrfan Khan, the company was on a lookout for a dynamic and well-loved brand ambassador who is as homegrown and authentic as the brand Syska. Rao, made his debut in the Indian film industry and achieved nationwide recognition for his flawless performances. Similarly, Syska, has grown manifolds to become the pioneer of LED lighting in the country, within a short period of time. The parallel between the two, found the actor the perfect fit to endorse the brand.

Commenting on the onboarding of Rajkummar Rao, Mr. Rajesh Uttamchandani, Director, Syska Group said, “We are extremely excited to have Rajkummar Rao as the new face of the Syska Group. Rajkummar is an apt choice for the brand because of his discerning choice of work and roles which reflects a sensitive, and mature actor. We believe that our journey at Syska is mirrored in his work. We are confident that our association with Rajkummar Rao will grow from strength to strength and will aid in recreating magic in the hearts of Syska’s loyal consumer base.”

Commenting on being the new face of the brand, versatile actor Rajkummar Rao said, “For me, Syska is a high quality, 100% homegrown brand. It is a pioneering company whose story is truly inspiring and which I relate to easily. Syska has created a niche category which is good for the country and has been making great strides in successfully convincing users to switch from traditional CFL to LED lights. I believe this is a very confident stance to take, and to me it conveys that you must always work hard and give your hundred percent in order to stay light years ahead of the competition. As a customer, this acts as a promise that we can always look forward to the best from Syska.”

The partnership will also see Syska Group launch a new ad campaign with Rajkummar focusing on LED and Fans, highlighting the many accolades that the brand has earned over the years. The campaign will begin shortly and will be executed strategically through leading TV channels in GEC and News genres in order to reach the masses across Metro, tier-2 and tier-3 cities. Its aggressive digital presence with publishers having high-traffic will further amplify the reach amongst the new-age customers and will only add to the momentum during the entire festival season right up to New Year.

About Syska Group – Starting with Guru Nanak Marketing, a company that was involved in the distribution of T-series Audio cassettes, CDs and audio video systems for Maharashtra, SYSKA Group had only one thing to do: grow. SYSKA Group has grown exponentially over the years and has become leader in the FMEG space and a pioneer of LED lighting. Empowered by a strong vision and drive, the SYSKA Group diversified into more segments such as Personal Care Appliances, Mobile accessories, Wires and Cables, Smart Home devices and only continues to grow and dominate these markets.

Posted by editor-manu-sharma at 3:45 PM