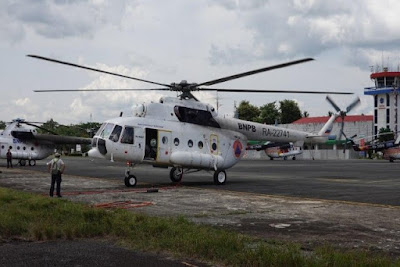 Ulan-Ude Aviation Plant (U-UAP) as part of Russian Helicopters holding company (State Corporation Rostec) launches Mi-8/171 type helicopter test operation program, which is aimed at the assessing of all the advantages of helicopters real operation in conjunction with all available corporate support tools and implemented aftersales services of Russian Helicopters holding company. The pilot project is being implemented in Indonesia, where two Mi-8AMT helicopters are already involved in firefighting operations.

Helicopters sent to the Republic of Indonesia with crew and technical staff of U-UAP were relocated to the island of Kalimantan almost immediately upon arrival to extinguish forest fires. In the future, the rotorcraft will be on operational duty on the islands of Sumatra and Kalimantan.

«A contract with PT. National Utility Helicopters (PT. NUH), a utility helicopter operator in Indonesia with 50 years of experience in providing services for Indonesian Government as well as private companies, has become the pilot project of this program. The main task under the contract is to carry out firefighting operations in the region, as well as provide consulting services regarding the formation of its own air fleet of Indonesian operators for annual firefighting operations” said Leonid Belykh, Managing Director of U-UAP.

In the process of temporary use of helicopters, the customer gets the opportunity to consult the company's specialists in 24/7 mode, access to a replacement fund and a fund of additional equipment.

It is worth noting, that one of the first Mi-171A2 helicopters manufactured by the enterprise, since 2018 has been participating in a test operation program at UTair-VU airline, where it successfully fulfills the tasks facing the operator and demonstrates high flight performances. The experience of the joint work of the manufacturer and the customer was reflected in the U-UAP helicopter test operation program for Indonesia.

Mi-8/171 helicopters for a long time have been involved in the disaster relief operations not only in Russia, but also abroad. They have proved themselves as one of the most effective tools in the firefighting, medicine delivery and casualty evacuation operations, as well as in passenger and cargo transportation to hard-to-reach areas.

JSC Ulan-Ude Aviation Plant  is one of the manufacturing enterprises of Russian Helicopters holding company. Modern production and technological capacity of the plant allows to organize quickly production of new types of aircrafts, to combine creation of prototypes with aircraft serial production. During the 80 years of existence the plant have produced more than 8000 aircrafts. Today the plant specializes in production of the Mi-8AMT (Mi-171E), Mi-171 and Mi-8AMTSh (Mi-171Sh) helicopters.

JSC Russian Helicopters (a part of the state owned corporation Rostec) is one of the world leaders of the helicopter production industry, the only developer and manufacturer of helicopters in Russia. The holding is established in 2007. The head office is located in Moscow. The holding company includes five helicopter plants, two design offices, and also the enterprises on production and service of vendor items; the aircraft repair plants and the service company providing after-sale support in Russia and beyond. Buyers of holding production – the Ministry of Defence of the Russian Federation, the Ministry of Internal Affairs of Russia, EMERCOM of Russia, other state customers, “Gazpromavia” and UTair airlines, the large Russian and foreign companies.

Rostec State Corporation is the Russian corporation established in 2007 for assistance in development, production and export of hi-tech industrial production of civil and military purpose. It includes more than 700 organizations from which nowadays established 11 holding companies in military-industrial complex and 4 in civil industries, and more than 80 organizations of direct control. Such known brands as AVTOVAZ, KAMAZ, the Kalashnikov Concern, “Russian Helicopters”, VSMPO-AVISMA, Uralvagonzavod etc. enter a portfolio of Rostec. The organizations of Rostec are located in the territory of 60 territorial subjects of the Russian Federation and deliver production on the markets of more than 100 countries. The consolidated revenue of Rostec in 2017 has reached 1 trillion 589 billion rubles, consolidated net profit - 121 billion rubles, EBITDA - 305 billion rubles. The average salary in the corporation in 2017 was 46,800 rubles. According to the strategy of Rostec, the main objective of Corporation is ensuring technological advantage of Russia in the highly competitive world markets. One of the key objectives of Rostec is implementation of new technological mode and digitization of Russian economics.