Your Money is Completely Safe with Paytm, and You Can Continue to Enjoy Wallet, Banking & UPI Services 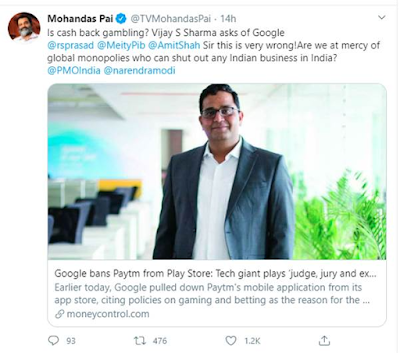 Paytm, India's homegrown financial services platform has assured its users that their money and accounts are completely safe and there is no disruption in the services. "All your money is completely safe, and you can continue to enjoy your Paytm app as normal," the company tweeted from its official handle to assure millions of its users. The company has also assured its wallet, banking, gold and UPI services are safe, secure and operational.

In an arbitrary move on Friday, Goggle had temporarily removed Paytm app from its Playstore for promoting UPI cashback & scratch cards. Paytm had launched ‘Paytm Cricket League’ on its app for users to engage in their passion of cricket and get cashback. The game allowed users to get player stickers after each transaction, collect them and receive Paytm Cashback. Google had unlisted Paytm from Playstore, claiming that this cashback offer is a violation of their policy.

However, Paytm said that giving cashbacks is a standard industry practice followed by all players, including Google Pay. The US-based tech giant has doled out millions in cashback to gain market share in India. The Noida headquartered Paytm is the country's largest payments app and competes with Google Pay.

This step has rallied massive support for Paytm against the unfair step by Google to thwart its competition. Several industry insiders, experts & journalists called out Google’s malafide intention and said that as a country India should not beholden to such tech giants.

Posted by editor-manu-sharma at 5:33 PM