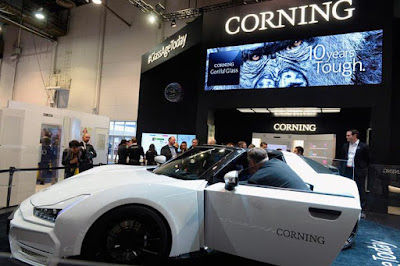 “Our invention of low-loss optical fiber ushered in a communications revolution,” said Wendell P. Weeks, chairman, and chief executive officer. “Fifty years ago, few could have imagined the impact of optical fiber on our world today, but that’s what we do at Corning – we create innovations that transform industries, enhance people’s lives, and continue to unleash significant new capabilities.”

Over the past 50 years, that groundbreaking invention has enabled the development of new technologies in data communications, video streaming, cloud computing, and more that enable the connected lifestyle the world is accustomed to today.

Today, more than ever, people seek to be connected, whether it's with family members in another region, global customers, or massive audiences on social networks. So, to celebrate the birthday of the invention that enables us to FaceTime, text, and connect to the Web – all while on the go -- Corning is taking a moment to reflect on how fiber became a reality.

Corning scientists Drs. Robert Maurer, Donald Keck, and Peter Schultz were brought together more than 50 years ago to develop a highly pure optical glass that could effectively transmit light signals over long distances – a feat that had never been achieved.

In the mid-1960s, it became clear to researchers at the company and to the larger telecommunications industry that the existing copper wire infrastructure used to transfer data and voice would not have enough bandwidth for the projected traffic of the future.

During this time period, members of the British Post Office came to Corning seeking assistance in creating pure glass fiber optics. Their design required a single-mode fiber having a total attenuation – or signal loss -- of about 20 decibels per kilometer.

The very best bulk optical glasses of the day had attenuations of around 1,000 dB/km. This meant the scientists had to see an improvement in transparency of 1098 in order to reach the 20 dB/km goal.

The task seemed impossible, but their successful technological breakthrough forever changed the world.

Dr. Keck recalled the breakthrough, saying: "I knew something was very, very special and unique about this fiber… I hastily measured the results. It was a very short piece of fiber; we thought we got a very good measurement. I recorded in the databook: '17 dB/km, whoopee;' We've met our goal."

Since that moment on Aug. 7, 1970, Corning has delivered over a billion fiber kilometers and operates several optical fiber plants globally. And even more impressively, this single invention led to what is today Corning's largest business segment – Optical Communications – in which applications such as fiber to the home, indoor wireless technology, and hyperscale data centers are served. 5G accessibility, the cloud, and almost any connection people make today on electronic devices ties back to that moment of discovery.

As they toiled in their lab that summer in 1970, Drs. Maurer, Keck, and Schultz could not have imagined what their discovery would make possible 50 years later. In that same way, today's Optical Communications team that invents, manufactures, and sells Corning's industry-leading fiber, cable, and connectivity solutions can scarcely imagine what this landmark discovery will make possible in the next 50 years.

Corning invites you to join in the celebration and visit http://www.corning.com/50YearsOfFiber and follow #50YearsofFiber on social media.

Posted by editor-manu-sharma at 5:14 PM