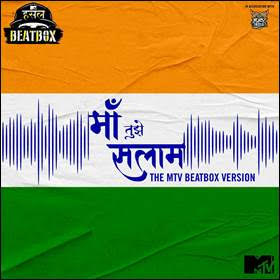 For the last two decades and more, this iconic song has been instrumental in instilling a sense of patriotic pride and national unity amongst millions. Even after garnering a Guiness World Records for being the song performed in the most number of languages, the legendary A.R. Rahman’s Maa Tujhe Salaam doesn’t cease to amuse us and infuse a plethora of emotions. As we step into the 74th year of India’s Independence, India’s No. 1 Youth Brand, MTV aims to scale up the celebrations with a musical innovation. In partnership with BBXINDIA, MTV is all set to launch a recreated version of A.R. Rahman’s iconic track Maa Tujhe Salaam, with a beatbox version.

This heartfelt rendition of Maa Tujhe Salaam, purely created with human mouth and vocal chords (vocal flute, Konakkol, and Beatbox only) for the first time ever, is a modern day tribute to the resilience of our nation on 15th August. Through this offering, the channel brings MTV Beatbox Hustle, an innovative extension to its flagship property, MTV Hustle- India’s first rap reality show. With this collaboration with BBXINDIA, an organization that has pioneered the culture of beatboxing in India, MTV brings a platform for all budding talents to showcase their expertise, create awareness about the subculture and give it a push that it rightly deserves.

This unique track owes its newness to three of the most talented beatboxers in India. Raka Vee, a Chennai-based beatboxer and founder of BBXINDIA, who with his decade-long expertise, has over 100 live shows worldwide to his credit. Ajinkya, a self-trained mouth musician from Mumbai who recreates the wind flute using his vocal cords only; Shivaraj Natraj, a well-trained Carnatic vocalist and Mridangam artist from Bangalore, also known as the Konnakol beatboxer who combines the oldest vocal percussion (Konnakol) with modern age beatboxing and brings the true mix of Indian beatbox flavor.

This partnership would also entail a series of LIVE sessions with the founder of BBXINDIA, Raka Vee, who will be interviewing talented artists from the Beatbox community for 4 weeks from MTV Hustle’s Instagram page.

So, this Independence Day, rejoice in the spirit of freedom with a vibrant beatbox rendition of Maa Tujhe Salaam, only with MTV India.

Posted by editor-manu-sharma at 6:08 PM