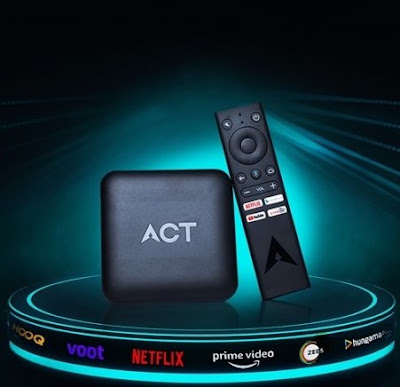 ACT Fibernet, one of India’s largest wired ISPs (Internet Service Provider), today announced roll out of its upgraded media streaming device – ACT Stream TV 4K to all its customers, on a device rental model starting as low as INR 200 + Taxes per month. Earlier ACT Stream TV 4k was available only to select customers in Delhi, Bangalore, Chennai and Hyderabad markets.

All your entertainment in a single screen

ACT Stream TV 4K is a streaming device that lets users view both TV channels and Video on Demand through a single unified user interface. Powered by android tv, the device comes with Dolby Audio, Bluetooth, and USB support, and over 3000 apps from the Google TV store.

“Customers today enjoy content on TV and across Video on demand platforms. With the ACT Stream TV 4K, we wanted to bring convenience and value to our customers. In line with our promise of Feel the Advantage, customers can now view/ stream all their favorite content (Streaming Apps+ live tv) in one place. Customers will also be eligible for special offers on Netflix (cash backs) and popular apps like Hooq and Zee5.”, said Ravi Karthik , Marketing Head , ACT Fibernet.

To provide customers with a complete entertainment experience, the device will now have Amazon Prime integrated into it along with existing streaming apps such as Netflix, Hotstar, Sony Liv, Hooq, Zee5, YouTube, Sun NXT.

ACT Stream TV 4K now also comes with unique feature of single click subscription where customers can sign up for Netflix and pay via their ACT Fibernet bill from Inside the device and enjoy cashbacks up to Rs. 500 p.m.

Customers will be able to watch their favorite shows from 100+ live TV channels including premium channels, and get 100 GB data each month complimentary till August 31st, 2020 as part of the launch

ACT Stream TV 4K can also be purchased on the website www.actcorp.in/streamtv4k at MRP of Rs.4499/-

All customers will get special promotional offer of 100+ TV channels, 100 GB extra data per month along with 1-month Zee5 and 2-months HOOQ subscription complimentary.

ACT Fibernet, one of India’s largest wired ISPs (Internet Service Provider) in India. ACT Fibernet is headquartered in Bangalore has operations in 19 Indian cities with over 1.5 million customers. ACT Fibernet is known for its cutting-edge technology and high-speed broadband connectivity that the company provides to its customers. ACT Fibernet was the first broadband service provider to bring 1 Giga speed connectivity in India to the city of Hyderabad in 2017, followed by Bengaluru and Chennai in 2018.
Posted by editor-manu-sharma at 4:37 PM