Peeking Beyond the Boundaries on Life and Beyond for Indian Woman 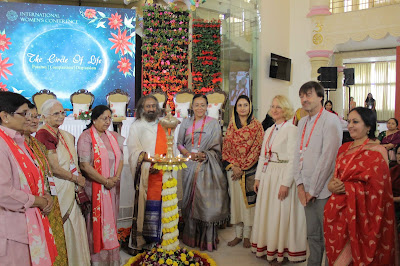 When women come together to discuss, exchange notes, contemplate on life and beyond, the outcome is unlikely to be mundane, run of the mill. And if these women also happen to be the movers and shakers, each having left their indelible mark in the fields they have forayed, the ensuing take away of such an interaction is bound to be monumental.

This is precisely what transpired during the recent three day International Women’s Conference hosted by the Art of Living, which brought together women leaders, scientists, artists, social workers, writers from across the world. The discussions amongst the women panellists hailing from diverse fields proved to be not only informative and engaging, but opened up vistas hitherto never visited or contemplated.

The theme opted for the conference was incidentally Circle of Life, taking the multiple discussions through various segments of life and lifestyle that are sparsely explored, deliberated, with some of the deliberations moving thence to the finer lines that are much more meaningful and fill with wonder, yet are scarcely pondered over or even paid heed.

It is all vibrations

An interesting statement emerged from celebrity chef Lauren Von Der Pool who championed the cause of vegan diet, with a best-selling book on the same, “Not many are aware of sound acting as a therapy, the vibrations of words having both negative and positive effects. This is especially clearly perceived in water, in the manner in which the water molecules transform to the vibrations of negative and positive words. Our body is made up primarily of water and the food and liquids we consume has water. Keeping the vibrations positive while preparing food is hence vital as it directly impacts the body.”

The state of mental health has become a serious issue world over, with cases of depression climbing steadily year after year. “Over 450 million across the world are suffering from some form of mental health issue and the cost of treating them is US $ 16 trillion. Unfortunately the pharmaceutical industry is looking at this as a business opportunity. The way to circumvent this serious situation is to work on individual peace as that is the beginning of individual mental health and in turn world peace”, contended Sumathi Jayaraman, Director, Strategy and Innovation, UNDP.

Nicolas Hulot, French journalist and environmentalist, expressed similar sentiments. “Cultural and economic factors destroy nature even when man is aware of the destruction. This is chiefly due to the lack of short term grinding where one experiences serious malfunctions that prompt action. The long term always appears far away, lulling people into a false sense of security, removing the urgency to act or even be aware to take the initiative. We need to alter this mind set and view ourselves as one world family and initiate change.”

Stating that nature has a mind and intelligence of its own just as even a single cell amoeba has the intelligence to forage food, Nicolas added, “yoga makes people connect with nature better as it settles the mind and calms the senses.” Resonating similar view was Luke Coutinho, Holistic Lifestyle Coach, who pointed that the internal environment of each individual impacts their external environment. “We feel refreshed when being amidst nature as it alters the energy levels and the manner in which the hormones connect. Our mind can heal when positive and this applies to food we eat too where it breaks down faster when consumed with happiness and positivity.”

An interesting analysis on the current modes of thinking and approach was offered by Architect Trupti Doshi using the example of an elephant’s eating habits and its habitat. “There is a subtle difference between the manner in which an elephant consumes food and a human consumes food. While the quantum that an elephant consumes is humongous, its approach to finding its food is extensive, where it would never leave any patch of its habitat barren by foraging through it. But a human’s approach to living is intensive, where several swathes of forest land could be cleared to meet his consumption needs.”

Recognising the urgency of addressing the ecology of our planet and reversing the adverse effects of climate change globally, the conference launched Mission Green Earth where it was proposed to plant 10 million trees by 2025 across the globe, with each person attending the conference taking the pledge to contribute in this venture. As a run up to the conference, the students of Sri Sri Ravi Shankar Vidya Mandir had planted 1,10,000 trees across the country. Art of Living, over the last four decades has planted over 81 million trees across the country and overseas. During the rainy season this year, it proposes to plant 5000 saplings.
Posted by editor-manu-sharma at 5:17 PM