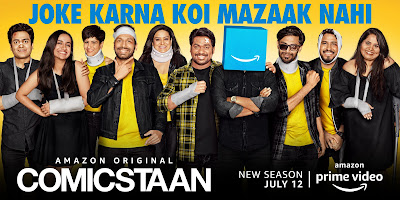 Following the big success of Season 1, Amazon Prime Video now brings an all-new season of Unscripted Amazon Original Series – Comicstaan as part of Prime Day 2019 celebrations. The 8-episode hunt for India’s next big comedy sensation returns with all new contestants, packed with new jokes and a double dose of laughter starting July 12, 2019. This season, popular comedians Zakir Khan, Neeti Palta, along with Season 1 host Sumukhi Suresh join the panel of veteran judges from the first season - Biswa Kaylan Rath, Kanan Gill, Kenny Sebastian and Kaneez Surka. The quick-witted host of Season 1, Abish Mathew, will be joined this time by another popular name in the stand-up comedy circuit, Urooj Ashfaq. Being a weekly release, Prime Members across 200 countries and territories can watch the first three episodes of Comicstaan Season 2 on July 12, followed by a new episode releasing every Friday.

Vijay Subramaniam, Director and Head, Content, Amazon Prime Video India, said, “When we first launched the service in India, we identified comedy as one of the most important genres for our customers and we focused on providing a strong selection while also creating a disruptive unscripted format for them. We believe we delivered on this promise through Comicstaan Season 1 - which, in many ways, was a game-changer in the way unscripted comedy content is viewed in India. The show with its pioneering format received a phenomenal response from audiences and encouraged us to push the boundaries of creativity further. So here we are, with a brand new season of this exciting show with fantastic new talent, a new jury panel and newer, rib-tickling jokes.  Our customers are in for many treats this Prime Day with Comicstaan and much more!

Dhruv Sheth, Managing Partner, OML, said, “Our long standing association with Amazon Prime Video continues to grow stronger through successful launches of great new and original content. We are truly proud of the institution we have created in Comicstaan that is not just a show that’s different, funny and engaging but, with the second, it has also become an institute where we are able to discover, hone and present new stand-up comedians to Indian audiences. We are very excited about the new season that is even bigger in scale and talent”.
Posted by editor-manu-sharma at 4:51 PM