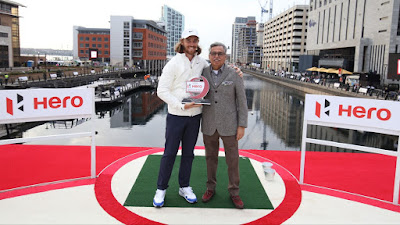 Tommy Fleetwood, the host this week, emerged victorious at the Hero Challenge yesterday amonsgt a large number of fans lining up the waterside at the iconic Liverpool Waters Princess Dock.

Fleetwood playing his third Hero Challenge showed amazing consistency as he made sure that he was right on target with each of his shots from the customised tee to the floating green in the middle of the water to score with each of his 22 shots and won the title in the innovative event ahead of the British Masters beginning Thursday.

Even though he found the target with each of his shots, Fleetwood at one point was one shot away from being eliminated by Charley Hull, the first woman to play the Hero Challenge.

Meanwhile, the Hero Challenge, was a high-scoring contest with players showing great ability to stop the ball on a floating target. Fleetwood totalled up a hige 250 points in the final to beat Wallace, the Hero Indian Open winner in 2018.

“I’ve not done well in these before, so if I had to pick one to win it would definitely be this one,” said Fleetwood, who plays host at the British Masters this week.

“Charley really pushed me in that semi-final - I was one shot away from being out. She was relentless, I knew it was going to be hard work when she was disappointed that she only scored 25 points with her first shot.

“I didn’t miss the target once in 22 shots, so I’m really happy with that. It was great having the home support in the final too.”

In the earlier matches, Kaymer got the event going in the first round with Wallace and Fleetwood. The players had 90 seconds to hit a maximum of ten balls at a target with four rings worth five, ten, 25 and 50 points, and the player with the lowest score was eliminated.

Kaymer hit a bullseye with his third shot en route to scoring 65 points but he was soon eliminated as Wallace (230) and Fleetwood (160) were in terrific form. Wallace had three bullseyes while Fleetwood registered 160 as he scored with every shot.

In the other first round match, Gallacher, the reigning Hero Indian Open champion, scored 100 points from his last three shots but he hit his final shot after the hooter to total 105.

Levy scored 110 to progress and while Hull only hit eight balls in her 90 seconds, but that was enough with four 25s and a bullseye that hit the pin giving her 150 points.

In the semis, the players were gven six shots each, hitting alternately. Wallace applied early pressure with three 25s in his first four shots, beating Levy. The second semi-final was a classic, as Hull put the pressure on with a bullseye with her third ball but Fleetwood made one with his fourth. Hull aced her final ball and Fleetwood needing to do the same did just that.