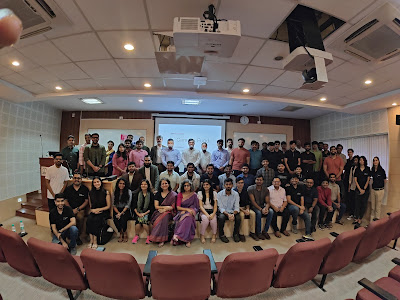 Campus Fund today announced its second fund to deepen its commitment of investing in student-led startups. Based on a funding model that has been successful in the Silicon Valley, Campus Fund has been funding Indian students for the last two years. It already has some notable successes to its name, ranging from Digantara (building google maps for space) to HealthySure (unified health insurance platform) to Expand My Business (B2B managed marketplace for digital services) amongst others, who have gone on to raise follow on funding from reputed VCs.
Karan Bhagat Founder, MD & CEO of IIFL Wealth & Asset Management, an investor in the Fund said, "Campus Fund is contributing well to unearth the most exciting startup talent in Indian universities. Student Entrepreneurs are shaping a better future for everyone in India and Bharat and we at IIFL Wealth & Asset Management will continue to do our part to help build this ecosystem."
Campus Fund  started  with a rolling fund of INR 7 crore in July 2020 and is the first fund of its kind in India to employ students as investors, who scout, evaluate and also get a seat in the decision making with regards to investments in student-led startups.
Deep Kalra, founder of MakeMyTrip said, “Campus Fund is unique in its purpose and approach and is a game-changer in the early venture space. It is becoming a formidable force on Campuses, in identifying innovation early on and nurturing it. I am excited to be part of it.”
Campus Fund is founded by Richa Bajpai, a student entrepreneur herself, starting out of a Dorm Room in her final year of engineering in 2009, and having co-founded Goodera, a global technology platform in the Tech4Good space. Bajpai says, “We worked with over  60+ Students across the country to scout and evaluate more than 1600 student led-startups in the last two years. We now have a portfolio of 10 diverse student led startups with strong fundamentals and a potential to shape the future and contribute towards India’s ambition of becoming a $5 trillion economy”.
Campus Fund is backed by large institutions, family offices, GPs of leading funds, industry veterans and founders, including those behind Delhivery, redBus, TaxiForSure, Sheroes, Udhyam Learning amongst others.
“Considering her entrepreneurial background and the exposure she has had with Creator Fund in the UK, Richa has an absolute advantage to build the student entrepreneurship ecosystem in India. Her experience, passion, hard work, patience and perseverance will make Campus Fund the most sought after student centric VC fund in India. She is doing the right thing in a right way to the right student community at the right time”, said Ullas Kamath – Former Joint MD at Jyothy Labs, Board Member VGuard, Wonderla amongst others.
With its second fund, Campus Fund will continue to invest at the pre-seed stage, playing the role of the first institutional check in student-led start-ups and supporting them through their journey.  “The level of innovation that is taking place across academic institutions in India and the crying need for capital to support these young entrepreneurs is a need of the hour and Campus Fund is well positioned to bridge this void in the Indian ecosystem”, said Soumya Rajan, Founder and CEO of Waterfield Advisors.
By searching for entrepreneurs at universities, Campus Fund  identifies a more diverse range of founders than traditionally accessed by venture funding. In keeping with this philosophy, Campus Fund has a portfolio that has 40% Non Tech Founders, 30% Female Co-Founders and 30% Hardware First Tech Enabled student-led Startups.
“We are excited to back Richa and the team at Campus Fund in their mission to promote student entrepreneurship in the country. This will give impetus to the bold young entrepreneurs who are solving important problems in the country and generating employment. We are impressed by their commitment towards diversity, in the selection of entrepreneurs they will back”, said Sarvesh Kanodia, Principal at Omidyar Network India.
The long term ambition of Campus Fund is to partner with student founders across the country - from Bangalore to Bhopal to  Jammu and to play its part in supporting the National Education Policy 2020 which encourages students to be job creators and innovators.
Posted by editor-manu-sharma at 6:32 PM