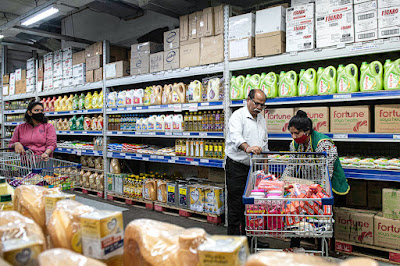 ·         Anniversary celebration will run from June 23rd till 10th August, and has been made available across METRO’s 31 wholesale stores and METRO Wholesale App

METRO Cash and Carry, India’s leading organized wholesaler and food specialist is commemorating its 19 years of successful operations in India and has rolled out special anniversary offers across its 31 ‘METRO Wholesale’ stores in India. Over 3 million small and independent business customers of METRO across the country can avail the anniversary offers in the 45 days long celebration starting 23rd June to ­­­­­­10th August 2022. The special offers have been made available on the METRO Wholesale App. https://bit.ly/2JxGMz4 (for Android users).

As part of the anniversary celebration, a special ‘Profits Just Got Bigger’ campaign has been introduced for small and independent business customers, especially the small retailers and kiranas to enable them to avail attractive deals and offers on a variety of products and help them pass on the benefits to their end customers. Special discounts and specially curated offers like Double Dhamaka (Buy One Get One) deals are being offered in a phased manner on a range of products across brands. During this period, METRO will be giving incredible anniversary offers like ‘Lowest Price in Town’, Buy More Save More, METRO Exclusive, and more such exciting offers to its over 3 million customer base in India.

Speaking about METRO’s 19th Anniversary in India, Arvind Mediratta, Managing Director & Chief Executive Officer at METRO Cash & Carry India said, “Over the last two decades in India, METRO India has been working towards empowering the small and independent businesses. Today METRO has become synonymous with being the voice of small businesses, retailers and kiranas. Our anniversary special offers have been designed to help support these independent businesses for them to enhance their cash flows and improve footfall and profitability for them to sustain the competitive battleground of modern retail and e-commerce.”

He further added, “Over the last 19 years, we have steadily worked towards providing a robust platform to several local and indigenous MSMEs and small businesses to grow their business with METRO. Along with this, we have provided customized solutions to our 3 million customers now to accelerate their business with new opportunities. On our nineteenth anniversary, I would like to thank thousands of our independent businesses, kiranas, HoReCa partners, supplier partners, and farming community, along with our resilient workforce at METRO, who have supported us in the journey to make METRO the most profitable wholesaler in the country.”

Since starting its operations in 2003, METRO has built a strong brand equity and trust amongst the MSMEs & independent businesses in India. As Champion for Independent Business, METRO has always been committed to supporting the entrepreneurial ecosystem; 99% of the products METRO sells are all locally sourced from MSMEs & local suppliers. In the last 19 years, METRO has been at the forefront of enriching these independent businesses and takes immense pride in empowering the Kirana ecosystem through its Smart Kirana program. A first-of-its-kind initiative, the program helps traditional mom-and-pop kirana stores to transform with modernization and digitalization solutions to compete with new-age retail players. METRO is leading the way in kirana digitization and has so far helped modernize operations of over 2000 kiranas across the country.

METRO Cash & Carry operates 31 wholesale distribution centres In India catering to over 5000 suppliers and has created over 15500 direct and indirect job opportunities across the country. To become a METRO Wholesale member, register with a valid business license and photo ID proof copy by calling on 1860-266-2010 or log on to www.metro.co.in

METRO is a leading international wholesale company, with food and non-food assortments, which specialises in serving the needs of hotels, restaurants, and caterers (HoReCa) as well as independent merchants (Traders). Around the world, METRO has some 17 million customers who benefit from the wholesale company’s unique multichannel mix. Customers can choose between shopping in one of the large stores in their area or delivery (Food Service Distribution, FSD) – all digitally supported and connected. At the same time, METRO MARKETS is an international online marketplace for professional customers that has been growing and expanding continuously since 2019. Acting sustainably is one of the company principles of METRO, which has been listed in various sustainability indices and rankings for many years, including FTSE4Good, MSCI, CDP and the Dow Jones Sustainability Index. METRO operates in more than 30 countries and employs over 95,000 people worldwide. In financial year 2020/21, METRO generated sales of €24.8 billion.